Reports have it that next flagship G-series phone from LG won’t be marketed as the LG G7, and while LG was almost done with the G7 designs, the device was allegedly scrapped in favor of what is today referred to as LG Judy. LG hasn’t clearly told us what its future plan for the LG Gx series and what its 2018 flagship will be, is the Korean giant retiring the G series or is it introducing a new Judy altogether? Whatever the case may be, an Israeli publication Ynet has today published a video and images of a device that’s clearly marked as the G7 with the codename Neo that is on display at the MWC in Barcelona.

Images and a short hands-on video of the LG G7 neo first posted by the Israeli publication reveals a sharp deviation from LG’s previous structure. It sports a bezel-free display with a top-notch hidden by the software at times similar to the latest Asus Zenfone 5, and at the rear, there is a centrally placed vertical dual-camera setup with a flash off to the left, while a fingerprint sensor lies directly under it. The rear appears to be made glass back is in tow without the 3D look of the V30 and LG G6.

On the spec sheet, the LG G7 Neo sports 6.0-inch OLED display with 3140 x 1440 pixels resolutions and 19:5.9 aspect ratio with the Snapdragon 845 coupled with 64GB of storage and 4GB under the hood. There also exists a variant with 6GB RAM and 128GB internal storage, but it is not certain what other variation exists between both.

Adorning the back side is a dual camera setup with two 16MP sensors (main one at f/1.6, wide-angle one at f/1.9), while an 8MP front-facing camera sits inside the top notch.

A 3000mAh battery, Android 8.0 Oreo and a new “boombox” feature that uses a DTS-X component to allow the speakers to “play with high resonance when placed on any surface”  rounds off the available specs list.

In all, the LG G7 Neo seems to be a good contender for the Galaxy S9. Whether on not the LG G7 Neo is the same as the rumored LG Judy remains to be known. 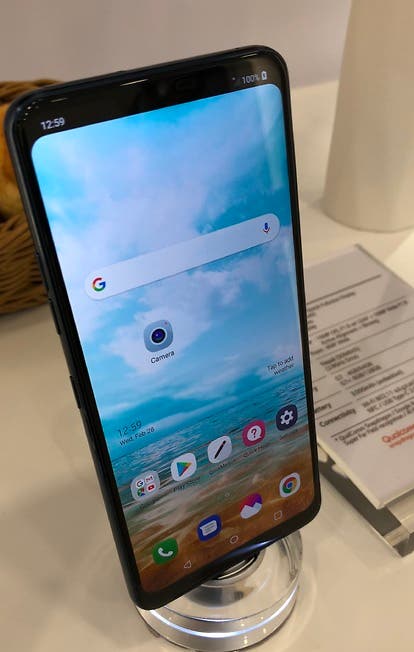 A separate report has it that  “LG V35,” LG Q7,” and a new smartwatch from LG are also on display at the MWC.

Next Elephone's design paves its way to innovation