At this moment, Xiaomi is announcing its next-gen flagship, the Mi MIX 2S. Though the manufacturer has made too many enhancements in software (especially in the camera app), many think its selling point is the Snapdragon 845 chip. Actually, as promised, the Xiaomi Mi MIX 2S is the first Chinese handset to carry this chip onboard. If you remember, last year, the first phone to sport a Snapdragon 835 and to come to China was another Xiaomi smartphone, the Mi 6. But everything changed in a year, and now the Mi MIX series models to pull the company. Well, if everything is clear with the first SND845-powered model, what about the second handset? It’s thought the OnePlus 6 will be the next. 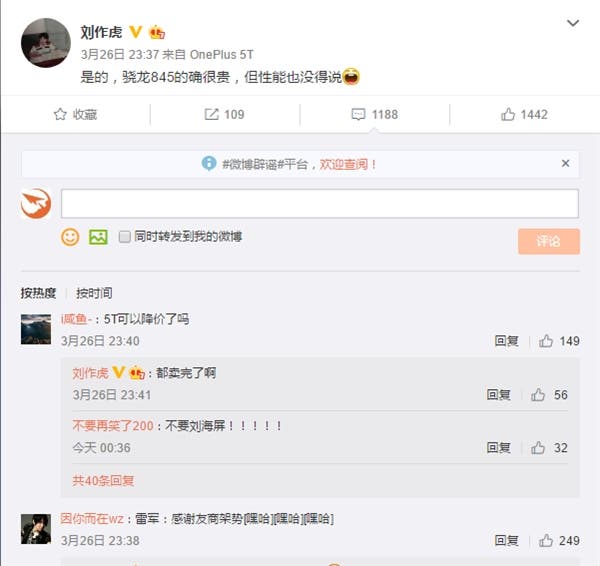 Undoubtedly, the next-gen OnePlus 6 will be packed with a Snapdragon 845. Last year, the previous model in face of the OnePlus 5T was considered to provide the most powerful performance. So there is every reason to think the company will do its best to continue doing the same. Yesterday, OnePlus CEO, Liu Zuohu said on Weibo that the Snapdragon 845 is indeed expensive, but its performance is really astonishing. Therefore, many manufacturers will keep bringing this chip to their flagships no matter what.

Something like this was said by Xiaomi CEO, Lei Jun. He said the Snapdragon 845 costs around 500 yuan when enters China. This made many geeks think the upcoming Mi MIX 2S will cost not less than 3000 yuan ($480). But when it comes to the OnePlus 6, analysts and customers think its higher variant with an 8+256GB memory combination will cost around 5000 yuan ($800).