French device maker, Archos has today expanded its smartphones portfolio with the release a not so new rugged smartphone with military-grade specifications.  Dubbed the Saphir 50X, the new baby in the house is a follow up to the Saphir 50 launched back in 2016, but while we ordinarily would expect the device to pack some superior internals, Archos rather chose to stuff the Saphir 50X with virtually same internals, albeit a slightly lower battery capacity, so we can safely assume the Saphir 50x is a downgraded Saphir 50 with smaller battery and a more recent OS.

While the original Saphir 50 feature a whopping 5000mAh battery, the new Archos Saphir 50x got just 4000mAh battery, and that has lead to a considerate decrease in the Saphir 50x weight down to 210 grams. The Saphir 50x now boots the Android 7 Nougat out of the box, an upgrade over the marshmallow based Saphir 50.

Everything else is virtually the same as with Saphir 50, and that includes IP68 certification for dust-resistant and water-resistant for up to 30 minutes, and the ability to withstand drops from almost 3 1/2 feet. 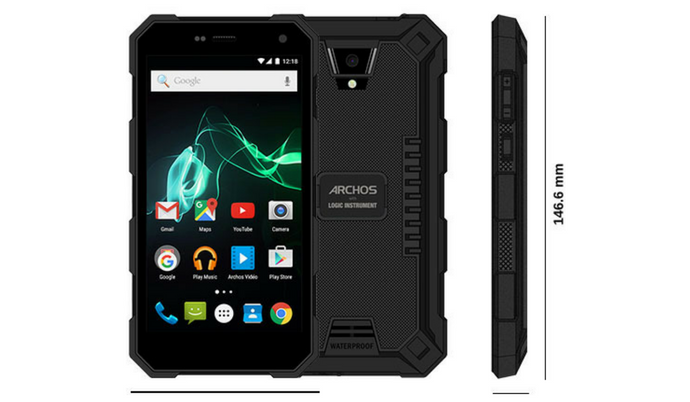 Other specs include a 5-inch HD display with 1,280×720 resolution, Gorilla Glass 4 protection, and is powered by a 1.5GHz quad-core MediaTek MTK6737 chipset coupled with 2GB RAM and 16GB of storage expandable up to 128GB via MicroSD card slot. It comes fitted with a 5-megapixel selfie camera, a 13MP main camera, and comes with full connectivity options including 4G LTE, Bluetooth 4.0, USB OTG and Wi-Fi 802.11 b/g/n

Archos is already taking Pre-orders and will ship in the following days at  €179.99.

Next Motorola sends out media invites for April 19 launch event