The Xiaomi Mi Mix 2s has landed, but the Chinese giant isn’t through yet with its launches, at least for the first half of the year, as we still anticipate the Mi Max 3, the Mi 6X and the Redmi Y2.

News around the Xiaomi Mi Max 3 and the Xiaomi Redmi Y2 is a bit scarce, but we have a handful of the Mi 6x leaks. The device which is tipped to launch globally as the Xiaomi Mi A2 has received the needed approval from TENAA, and even had it full specs sheet leaked out a few days back, now we have more evidence that the device alongside the Redmi Y2 might soon arrive India, just as the Mi A2 and the Redmi Y2  were spotted in the source code of the Indian version of the official site of Xiaomi.

As shared by a credible leakster and a twitter user, the image below is a snapshot of the source code of a portion of Xiaomi India website. The words “Mi A2 Hard Case”, “Redmi Y2 Perforated Case Black” and “Redmi Y2 Perforated Case Blue” has been referenced on the website, though it has since been removed, this is an indication that both devices might be arriving India soon.

Recall, that the Xiaomi Mi 5X was announced outside of China as the Xiaomi Mi A1 with Android One support, hence the belief that the Mi 6X might be announced globally as the Mi A2 possibly with the same specifications.

Recent reports have it that the device might come with a 5.99-inch and powered by the Snapdragon 626 chipset with an octa-core CPU clocked at 2.2 GHz, coupled with 4 GB RAM and 64 GB internal storage.

The Xiaomi Mi 6X/A2 is also tipped to come fitted with a dual rear camera setup having a 20MP + 8MP combo with f/2.0 and f/1.8 aperture for both sensors respectively. The selfie shooter is a f/2.0 20MP camera. It comes with a rear fingerprint scanner and its lights will be kept on by a 2910 mAh battery. 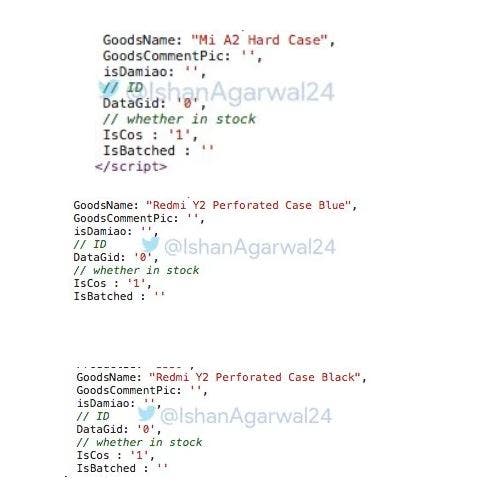 The China-bound Mi 6X is expected to boot Android Oreo 8.1 OS with the MIUI 9.5 with limited Google services out of the box, while the global Mi A2 should have stock Android.

The source code also referenced the Xiaomi Redmi Y2, so the device might debut alongside the Mi 6X/A2,  but there are however no actual specs and features rumors ye

Next Nokia 8 Sirocco Re-Opened for Sale at 4699 Yuan