HMD Global since it returned the Nokia brand to the mobile phone market has done quite a number of plausible things. Aside from launching smartphones with the Nokia branding, the company to the admiration of many introduced a refresh of the iconic Nokia 3310, including a 3G and 4G LTE-capable variants which were introduced in China a while back.

Following the Nokia 3310, the company at the last MWC 2018 revealed an updated version of its curved 8110 mobile phone first seen in 1996, and if words on the streets are to be taken for, the company is once again bringing back the old Nokia X series with the Purported launch of the Nokia X6 slated for unveiling today in China.

Now, just hours ahead of the Nokia X6 unveiling, the company has dropped a teaser on Weibo which indicates it might bring the Nokia N-series back to life later in May. The teaser however didn’t mention the N-series model that might be unveiled, the accompanying image suggests the Nokia N8 might be the right candidate. As hinted by the company, the launch event might take place between April 27 to May 2 at the Sanlitun, Chaoyang District, Beijing, China. 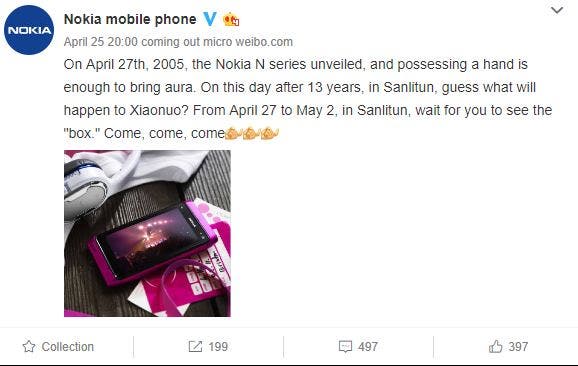 The multimedia-heavy Nokia N8, featuring a 12-megapixel camera and HD video recording was announced exactly 8 years ago with a set of hardware specs targeted directly at users of the Apple iPhone.

Previous Flashy notched Elephone A4 on sale for just $99.99