AnTuTu score of an ASUS Zenfone smartphone has appeared online and going by the model number, the device could very much be the flagship Asus Zenfone 5Z which is expected to go on sale later in May. The photo/screenshot of the Zenfone 5Z first surfaced on Mydrivers with its AnTuTu score of 274499 points.

While the score seems to be a match for most other recent flagship devices powered by the Snapdragon 845 SoC, it, however, beats the score posted by Xiaomi recent flagship model – the Mi Mix 2S, while it is quite below that of the recent Gaming beast from Xiaomi owned Black Shark with AnTuTu score of 279,464 points.

While the score is an indication of the processing prowess of the device, it is, however, pertinent to note that the device is yet to be pushed to the market, and as such may still undergo some minor software and hardware optimization which could impact on the scores.

Announced back at the MWC, the ASUS Zenfone 5Z is the most premium of ASUS 2018 Zenfone 5 series. Made of glass and aluminum body, the ASUS Zenfone 5Z has a centrally placed fingerprint sensor while the dual-rear camera setup follows the iPhone X design offering a regular lens and an ultra-wide lens as seen with the LG G6 and the V30. 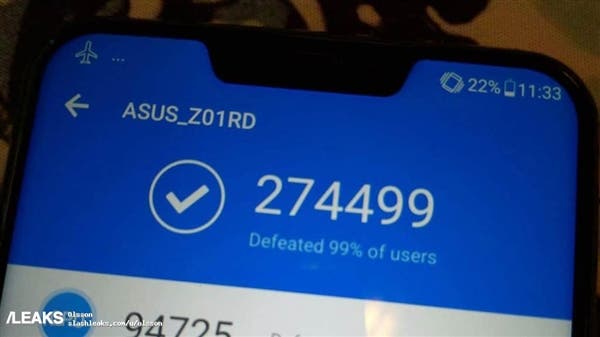 It flaunts a 6.2-inch display with 19:9 aspect ratio, a Full HD+ resolution with the iPhone X’s notch on the top. The device comes with up to 8GB of RAM and 256GB of storage and is powered by the top-end Snapdragon 845 chipset.

Next Huawei Seek To Replace Android - Developing Its Own OS