When the Samsung model SM-G8750 passed TENAA, we knew that the manufacturer was serious about a Galaxy S8 Lite version. However, we feared that this would be a China exclusive event. Well, thankfully it seems not to be. The same model number SM-G8750 has received FCC approval, as per a leaked screenshot. You can find the screenshot below.

The Galaxy S8 Lite has an FCC ID ID – A3LSMG8750. Sadly, we can’t tell right now what difference is there between the TENAA model and the FCC version. Apart from the FCC ID no other specifications are known. 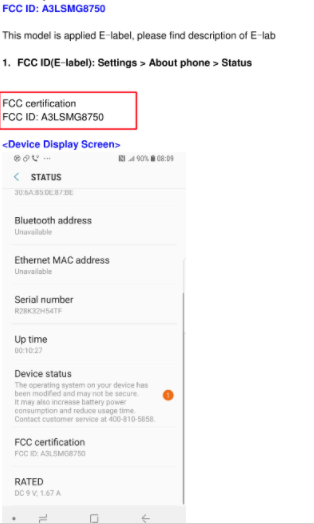 But if the TENAA certification is any indication, then it should be a very interesting device. The Galaxy S8 Lite has a 5.8-inch display that tops out at 2220 x 1080 pixels. Internally, the handset will feature a Snapdragon 660 chipset with at least 4GB of RAM. Of course, there are compromises in a lite model and the S8 Lite appears to swap a lower-end 16-megapixel camera for the original 12MP shooter on the S8. Rounding off the internals, the battery is of 3,000mAh capacity that will power Android Oreo.

The external looks are of course the whole point of the Galaxy S8 Lite. Hence, we’re likely to see a curved edge display. Also, Samsung has borrowed many things from the Galaxy S8 from the Bixby button right down to the odd fingerprint placement.

If the Galaxy S8 Lite does actually end up being global, it will be after a long time we’re seeing a Lite version of the flagship S series. And we’re happy to see it back.