When at the beginning of 2018, VIVO introduced a full-screen concept smartphone named APEX, there were too many users thinking it’s the final version of the handset and what we will get at the end won’t differ from this model. However, nowadays, when the launch date of the mentioned phone is getting closer, we see the manufacturer has made many changes and the final version will differ from the APEX a lot. Recently, we have seen too many leaked photos of the alleged final version dubbed as the VIVO NEX. So its design was on everyone’s lips. But what about its hardware and pricing? Today a photo spotted in the net that caused a huge stir. It turns out the NEX will cost a fortune. 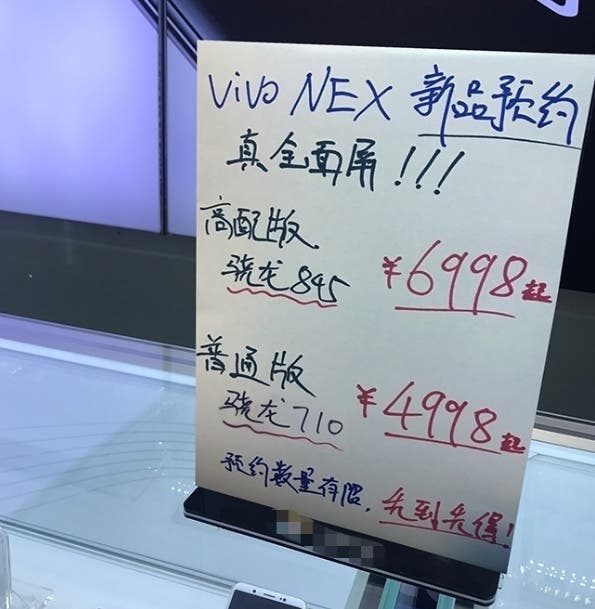 Seems the VIVO NEX will use narrowed forehead and borders, but it will retain the chin. On it, the phone will carry a front camera like the Xiaomi Mi MIX series handsets. But there were rumors, this camera will provide the face recognition function only. Thus, the pop-up front camera seen on the APEX will be kept on this model.

Anyway, we have talked about the appearance of the VIVO NEX too much. So it’s the right time to understand whether we are dealing with a top-end smartphone or not. Previously, it’s been leaked the phone will sport a Snapdragon 845 chip along with an 8GB LPDDR4X RAM, UFS 2.1 storage, an AI support. All these features hint at its high-end status. But the photo above shows there will be two variants. One of them will feature the mentioned SND845 chip and be priced at 6998 yuan ($1091), while the second version will be packed with a Snapdragon 710 SoC and cost 4998 yuan ($779).

If these leaks are true, the VIVO NEX will be one of the most expensive full-screen smartphones around the globe. So it turns out the true full-screen design affects the phone’s pricing greatly.