Huawei has just teased its second-generation of xSport wireless headsets today. The company is a bit late with the refresh of the series as the original xSport launched in February last year. They weren’t exactly cheap as they were priced 299 Yuan. The headsets came with premium features like waterproofing and noise cancellation.

So, what will the new xSport wireless bring to the table? well, apparently it will feature heart-rate monitoring. That’s hinted by the teaser and that’s the only addition we know of. But we won’t have to wait a lot. If you’ll see the teaser, you’ll notice the design hasn’t quite changed from the original ones. Honor has also discounted the original xSport wireless to 228 Yuan. The price cut isn’t big which indicates that the new ones will be pricier. 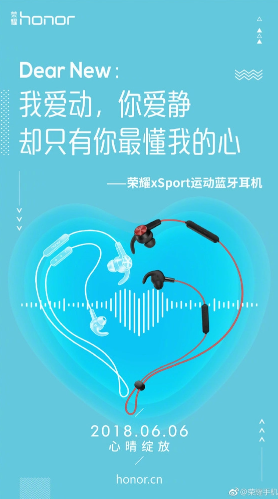 Honor will also be launching two new smartphones at the event slated to take place on Wednesday. The Honor Play is one of them and it could come with Kirin OS that could steal the show at the event. The other smartphone is the Honor 9i (2018). Not a lot is known about these two handsets, but stay tuned as we’ll be bringing you the details.

Previous Vivo Z1 goes on sale for an effective price of 1,598 Yuan