In the era of smartphones, we have experienced revolutions in screen size, from the initial 1-inch monochrome display to the now-common 6.0-inch display. It allows us to do more things with our handsets. Recently, Statista announced last year that Chinese have used phones for more than 3 hours on average each day. They also predicted this time will increase in 2018. This is related to the fact smartphones have become the most important personal devices in the world. But obviously, the impact of smartphones on human health has also become a focus of concern for many people. Some say the OLED screens hurt more than the regular LCD screen. The next group of discussers is sure to the contrary. 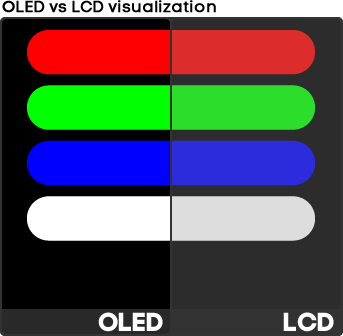 We all know the AMOLED display is a screen composed of self-luminous organic materials. It does not require the LCD backlight, because when the beam passes through the organic material, the pixels will self-illuminate. Therefore, compared with the LCD screen, the AMOLED has higher contrast and other display advantages.

All monitors have brightness adjustment function. But due to the difference in materials, the dimming technology is different. The most popular current smartphones are DC dimming and PWM dimming. LCD screens rely on LED backlights for light emission. Therefore, in the field of smartphones, LCD screens mostly use DC dimming, which is a technology that adjusts the brightness by directly controlling the currents on both sides of the light-emitting device. The smaller the current, the lower the brightness.

DC dimming itself is a very straightforward method. But it has obvious drawbacks. As the wavelengths of the three primary colors are different, DC dimming can cause inevitable color casts at the extremely low brightness.

The DC dimming and AMOLED screens are even more incompatible. As mentioned earlier, AMOLED displays are self-illuminating technologies that rely on organic materials. Therefore, the display quality of the AMOLED display is directly related to the quality of the screen materials. The color difference between pixels will be clearly demonstrated. Under DC dimming, early models such as the Galaxy S, S2, and Note suffered from uneven white color and serious color casts. What’s sadder, this problem has not been solved well even so far.

Perhaps precisely because of this, PWM dimming became another choice. Unlike DC dimming, which directly adjusts the current level to control the brightness, the PWM dimming method is more ingenious. We know that the switching light source causes flickering. The faster the switching speed, the faster the screen flicker. But when the frequency of the switching light source exceeds the limit of the human eye, since the luminance information of all the screens is superimposed on each other in the human eye, the speed of the frequency will only affect the brightness of the screen. This technique, for controlling the brightness by rapidly switching the screen light source, is called PWM dimming (Pulse-Width Modulation). So we can state, the PWM dimming reference solves the problem of the early low-brightness color cast in the AMOLED display, and in fact further improves the color stability.

However, since PWM dimming is a technique that adjusts the brightness by fast flickering, even if the human eyes cannot perceive the screen changes in the switching process, our brain responds to this phenomenon. Frequent flickering cause fatigue, which stimulates the refraction system to work together to accelerate the aging of vision. Since all current Samsung AMOLED displays use 250Hz low-frequency PWM dimming technology, the lower the screen brightness, the lower the strobe rate, and the greater the possibility of human eyes being able to perceive, making it easier for sensitive people.

Previous Can Chinese Smartphone Makers Step Out of Apple's Shadow?

Next OPPO A73s With Helio P60 To Launch Later This Month

OnePlus Nord 2 display gets detailed by the company