Recently, Huawei officially announced that it will uncover the Huawei Nova 3 at the Shenzhen Universiade Gymnasium on July 18, and released a poster disclosing the appearance of this smartphone. 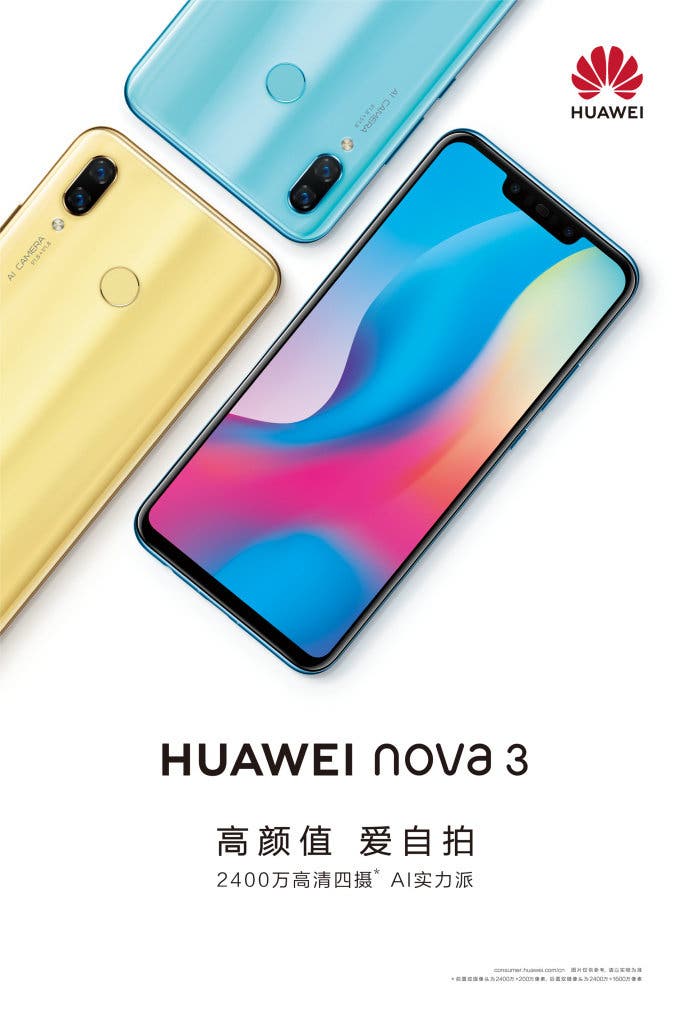 According to the poster, this phone that is aiming at young customers will come in three color options, including yellow (gold), sky blue, and twilight like the Huawei P20 Pro, which has managed to win the world. By the way, the sky blue variant is identical not only to the Huawei Nova 2s but to the P20 series models as well. As expected, the Huawei Nova 3 uses a structural color gradual plating process to provide a mysterious aurora color.

Honestly, the Huawei Nova 3 adopts almost the same design as the Nova 3e launched previously. It sports a vertically arranged dual-camera on the back and a 6.3-inch notch screen on the front. According to the official data, the phone is packed with a 24MP HD dual-camera, while the rest of features include a Kirin 970 flagship chip, 6+64/128GB memory combination, and a 3650mAh battery (if believing in TENAA information). However, there were rumors this phone may come with a new chip named the Kirin 710. As the name suggests, this SoC will release to compete with Qualcomm’s Snapdragon 710 that already managed to appear on the Xiaomi Mi 8 SE and VIVO NEX A. We guess it will sport Huawei’s latest scary technology dubbed the GPU Turbo. As you know, due to it, the phones are capable of providing extreme gaming experience.

There is no launch date yet, but the previous rumors suggested the Huawei Nova 3 will debut in July. As the company officially released a pre-heating poster, there is no reason to doubt this launch time.

Next Huawei TalkBand B5 Spotted In Spy Photos