There has been speculations and rumors regarding the upcoming flagship Snapdragon 855 chipset from Qualcomm. This year, we saw the preponderance of smartphones with SD845 and it appears that we might be having a similar situation next year with the Snapdragon 855. Earlier rumors suggest that the SD855 will be built on a 7nm process and early this month, a mysterious Sony phone made its way to Geekbench with the Snapdragon 855 onboard. Earlier today, we reported that the SD855 has gone into mass production since early June and now a new Xiaomi smartphone with Snapdragon 855 SoC just surfaced on Geekbench. 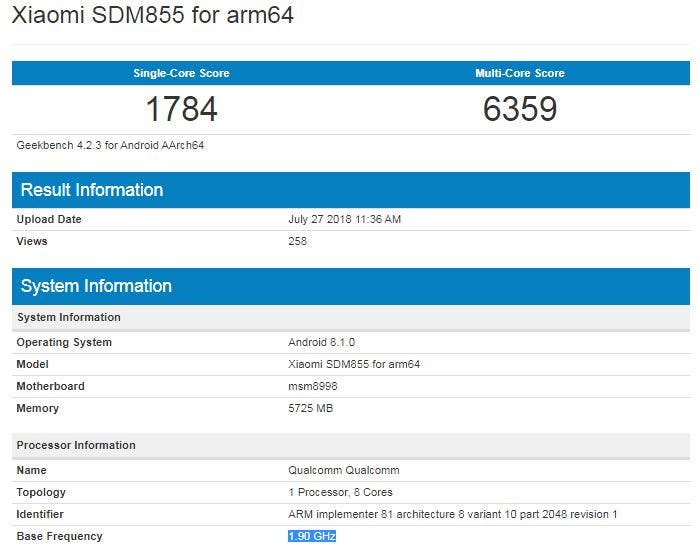 What’s more interesting though, is that the new machine’s single-core performance score reached 1784 points on Geekbench, while the multi-core running score reached 6359 points. This is lower than Qualcomm’s best current processor, the Snapdragon 845. The processor is ID’d as Snapdragon 835 though and its scores are also on the SD835 level. This creates some sort of doubt if this device is really an SD855 based smartphone. From the Geekbench listing, this smartphone will come with 64GB memory and it runs on Android 8.1.0. This chip has also has a base frequency of 1.90 GHz. As of now, there is no information regarding the particular Xiaomi smartphone to use this chip but the appearance of these smartphones with the Snapdragon 855 processor indicates that this chip will soon be launched.

Next Classy Lenovo Watch X for just 42.13€ with This Coupon