While the OnePlus 6T is expected among those who follow closely OnePlus agenda, we haven’t seen any confirmation of the smartphone existence until now. The first consistent leaks pointing to the handset release, started to appear last week when rumors pointed that the 6T would be the first handset to be sold at the US through a popular network carrier (T-Mobile). Today we got the first official confirmation that the handset really exists and will be introduced later on this year.

The new handset, which is labeled as OnePlus A6013, has been recently certified by EEC – Eurasian Economic Commission – While this certification leaves no doubt that this handset will be launched, it doesn’t reveal further details about features and specifications.

However, taking a base on the previous reports the OnePlus 6T will be sold at the US by T-Mobile with the $550 price tag. When it comes to the specifications, everything points to the Snapdragon 845, making this a more incremental update rather than a more powerful flagship smartphone. Also, there is a high chance that the OnePlus 6T will bring smaller bezels, thanks to a smaller top-notch that should borrow the Teardrop design from handsets like the Essential PH-1. 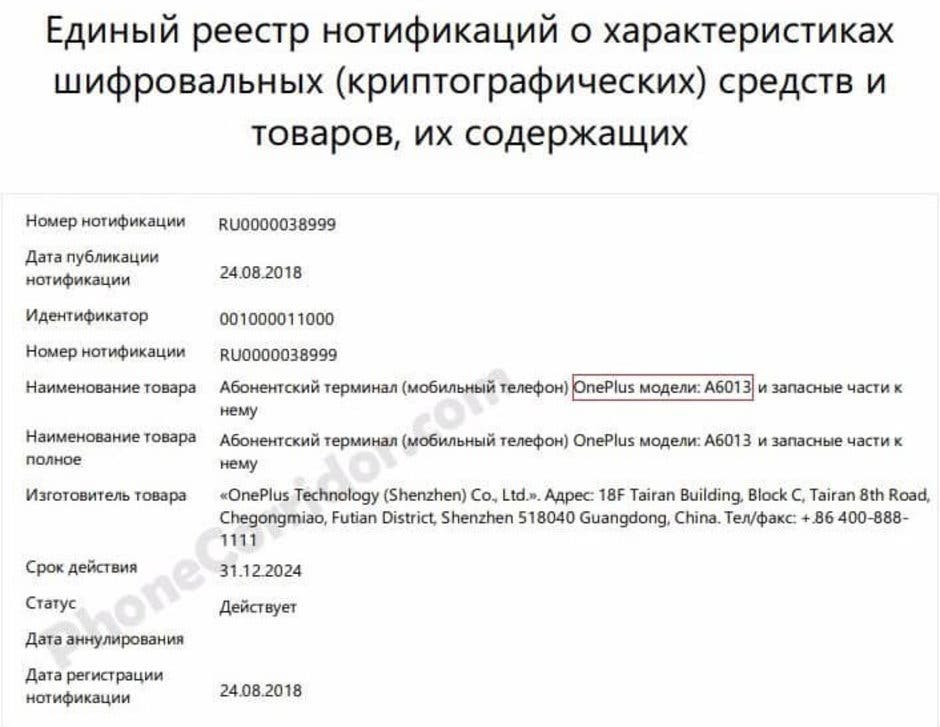 The rumors indicate that OnePlus 6T will feature a 6.4-inch larger AMOLED panel, a dual-camera setup on the rear made of 12MP+20MP cameras and a 20MP selfie-snapper. Worth noting that those specs are borrowed from the recently released Oppo R17 Pro. One time that both Oppo and OnePlus are part of the same BBK group, and the latter has borrowed design and specs from the former on several occasions, we wouldn’t be surprised if the new flagship killer comes as a re-imagined Oppo R17 Pro.

We’re pretty convinced that OnePlus 6T will reach the shores later on this year, though we can’t affirm when. Judging by the past years, we would bet in a November release, however, we should keep an eye on the upcoming signs of OnePlus 6T arrival. The next confirmation would be the massive reduction on OnePlus 6 stocks around the Globe. For now, let’s just keep following the rumor mill.