We have heard too many leaks and rumors about the upcoming LG flagship, namely the LG V40 ThinQ. But what’s annoying, while the rest of the smartphone vendors are launching various amazing models one after another, we continue getting rumors about this phone. It’s better for LG to launch something rather than work on it infinitely. Seems, the end I nigh. This handset has got all possible certifications and has leaked in multiple spy photos and documents. The one we got today is the confirmation of all those leaks. 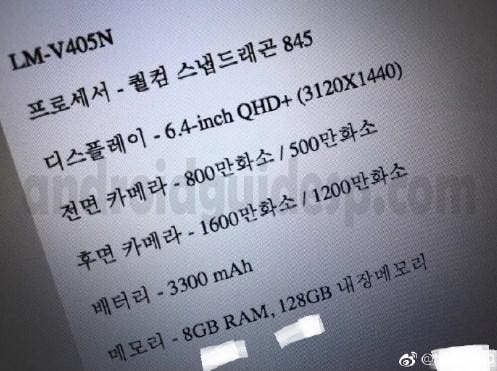 Previously, we have heard the LG V40 ThinQ will be equipped with a 6GB of RAM. Today’s leak shows there will be an 8GB model as well. Moreover, it will be paired with a 128GB of storage, which is quite expected. As for the battery, our protagonist will be packed with a 3300mAh capacity battery.

The rest of the features are identical to what we have heard previously. Say, we know the LG V40 ThinQ will sport a Qualcomm Snapdragon 845 chip and a 6.4-inch notch screen with an aspect ratio of 19.5:9 and a resolution of 3120×1440.

In terms of camera features, the LG V40 ThinQ is said to come with a triple-camera design, which uses a 12MP (f/1.5 aperture) + 16MP (f/1.9 aperture) + 12MP (f/2.4 aperture) sensors combination. At the same time, the phone will support a telephoto, wide-angle, 2x zoom, and smart shooting. On the front, the manufacturer has placed a dual-camera with an 8MP + 5MP combination.

LG has already sent an invitation letter to a number of media to confirm that it will hold a chip launch in New York on October 3. It’s assumed the LG V40 ThinQ will be launched immediately after that.