Recently, Lenovo has revised its strategy concerning the mobile business and released a few amazing models. Among them, we can mention the Lenovo S5 and Z5. The latter was compared to the Apple iPhone X. Of course, these are different products for different categories but the company’s CEO said it’s too easy to make an iPhone X – like smartphone. So there is no need to praise the Cupertino-based company for it. Now we are waiting for the enhanced version of the S5. It is going to sport a sliding design like the upcoming Xiaomi Mi MIX 3 and the Honor Magic 2. Therefore, it is reasonable to see a true full-screen design with not bangs. But seems there will be another innovative feature on the Lenovo S5 Pro. 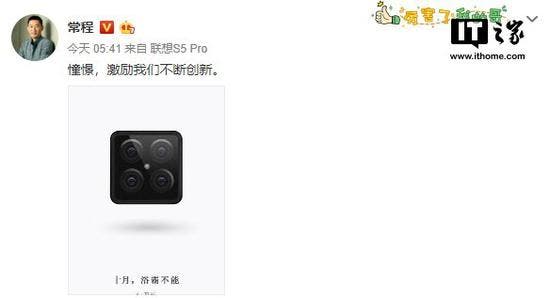 Two days ago, Lenovo’s vice president Chang Wei posted on Weibo that they would release a quad-camera smartphone in October. Later it was supposed this device is going to be the Lenovo S5 Pro. As for today, an interesting post was shared through Weibo. There is every reason to think we are dealing with the quad-camera layout of the upcoming model.

Actually, there were two assumptions. Some people have been thinking the sliding structure will appear on the Lenovo Z5 Pro, while the second group of users was sure it will be on the Lenovo S5 Pro. We tend to think it will be the successor of the Z5 instead of S5 because the former one has succeeded more and has been considered to be a more innovative smartphone. So there is every reason to think the company will bring the mentioned innovative technology and the four-camera design to its successor.

However, the Lenovo S5 Pro (or the Lenovo Z5 Pro) is set to be released in October. Although no specific date has been announced yet.