This afternoon, Lenovo officially released the ‘Epoch-making flagship’ Z5 Pro, with a 6.39-inch slide screen. It is the third smartphone with such a structure. And honestly, with its launch, all of our expectations are over. There is no other smartphone with a sliding structure we have heard about before. So now we can compare all three models and understand which of them comes with more advantages. But Lenovo Group Vice President has outrun us, releasing a comparison chart of the Lenovo Z5 Pro with the Xiaomi Mi MIX 3 and the Honor Magic 2 through his official Weibo channel. So we just have to take a look at it and make assumptions. 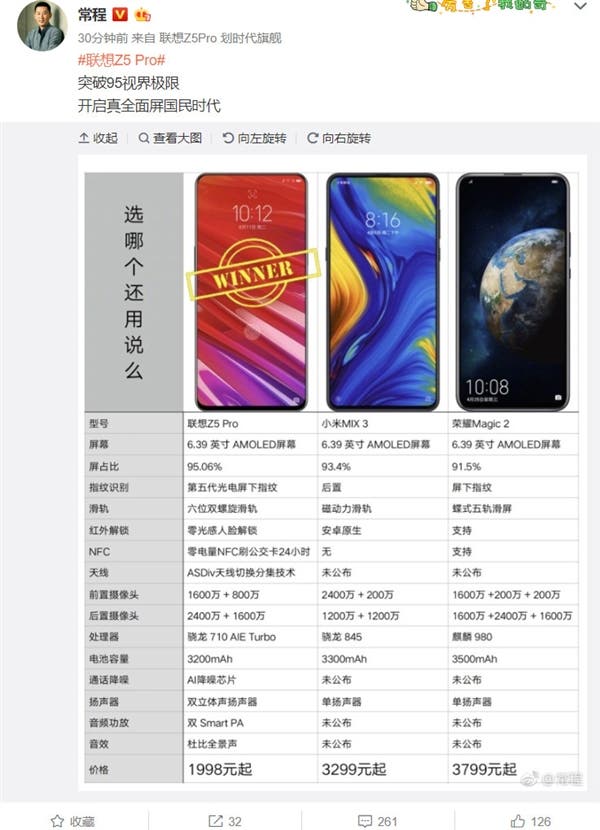 The first thing we should pay attention to is the screen size. Surprisingly, all three models are packed with a 6.39-inch AMOLED screen. But the screen ratios differ a lot. Say, the lowest ratio belongs to the Magic 2 that has 91.5% occupation. The Xiaomi mi MIX 3’s screen has a ratio of 93.4%. And the winner is the Lenovo Z5 Pro, which has the industry’s highest screen ratio of 95.06%.

And though the author of this comparison chart hurried to make the Lenovo Z5 Pro a winner, there are real differences in hardware and camera. So it’s not as clear as you can think. First, the Z5 Pro is packed with a Snapdragon 710AIE Turbo chip, which is considered to be a pseudo-flagship SoC. In this sense, the winner should be the Honor Magic 2, which sports the world’s first 7nm processor, the Kirin 980. And the second place should be taken by the Mi MIX 3, which is packed with Qualcomm’s current flagship chip of the Snapdragon 845.

By the way, the Honor Magic 2 is a winner in other aspects as well. Say, it features the largest capacity battery, it comes with a hexa-camera design, and so on. But there is another important factor that makes us change our opinion. The starting price of the Lenovo Z5 Pro is 1998 yuan ($287), while the Honor Magic 2 comes at 3799 yuan. In the price-over-features ratio, the Z5 Pro can be considered to be the winner.

Next WhatsApp: ads are coming soon to your Status, it's official!