The Qualcomm Snapdragon 855 has not been available on any smartphone yet. We know it will be based on a 7nm process node and come with a way improved performance concerning all the aspects of CPU, GPU, AI, power consumption, connectivity, camera, etc. But before it hits the market, the Huawei Kirin 980 chip has already managed to become synonymous with the new flagship SoC in the Android camp. It comes with a new-generation A76 architecture, an enhanced ARM Mali-G76 GPU, etc. Shortly, it is the world’s first SoC in terms of, at least, six aspects. But who said Huawei will stop here? This manufacturer spends billions on R&D. Say, it spent over $300 million on making the Kirin 980. Yesterday, the XDA editor Mishaal Rahman tweeted the Kirin 985 is already in work. 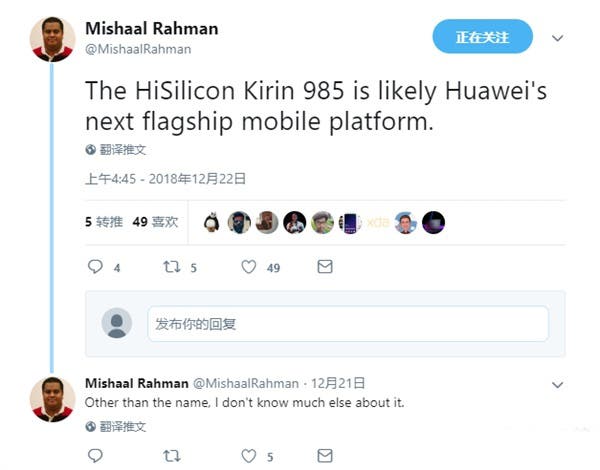 However, he did not dare to confirm 100% but said that ‘The HiSilicon Kirin 985 is likely Huawei’s next flagship mobile platform. At this moment, nothing but the name is known about the upcoming top-notch SoC of the company.

The digital suffix of ‘5’ is not the first time to appear in the history of Kirin chips. There have been the Kirin 930/935 and 950/955 in the 900 series, and the Kirin 655/658/659 in the Kirin 600 series. Judging from this practice, the Kirin 985 may really exist. Most likely, we are dealing with the enhanced version of Kirin 980, such as increasing the CPU/GPU frequency, etc. After all, it will still be using TSMC’s 7nm process node, the A76 architecture, etc. This is quite logical if taking into account the fact the Snapdragon 855 reached 2.84GHz clock speed, while the Kirin 980’s big core frequency is only 2.6GHz.

Since XDA has captured the Kirin 985, will it be released along with the P30 series?

Previous Why is Lenovo not as good as Huawei?

Next This Week on GizChina - Lenovo at it Again, Samsung S10 Rumors & More