Earlier today, senior vice president of Meizu and president of the Flyme Division Yang Yan, announced his resignation on his official private Weibo account. This message was first seen by his close associates but it finally leaked to the rumor mill. Subsequently, Huang Zhang, Meizu CEO, said that Yang Yan had been biased with the operation of the company for a few years ago. His statement roughly reads

“A few years ago, Yang Yan’s interest was partial, and Flyme was responsible for it. Yang Yan was promoted by me, but it can only be adjusted according to his personal wishes and interests.”

Accordingly, the company has readjusted and Vice President Zhou will take over the work of Yang Yan, and General Manager Peng will be in charge of the commercialization business. Yang Yan served as the director of Meizu products from 2011 to 2014, and in 2014 became the vice president of Meizu R&D, responsible for the design, development, and operation of the Meizu “Flyme OS” system. 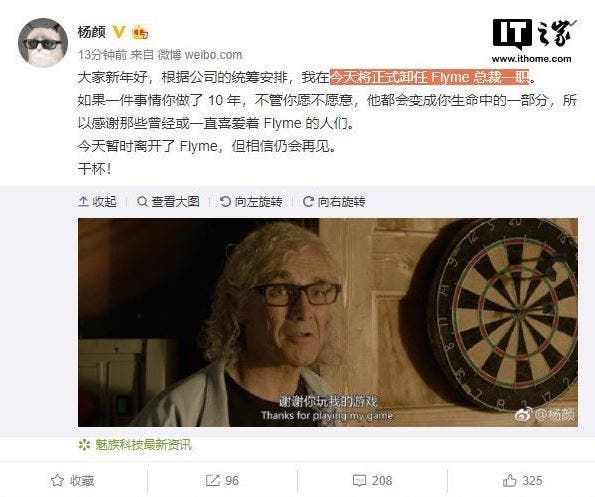 Tonight, Yang Yan said on Weibo, “If you have done it for 10 years, whether you want it or not, it will become a part of your life, thank you to those who love Flyme.” He also said, “I have left Flyme for the time being, but I believe I will see you again.” (Translation is a bit rough).