Today, Xiaomi held a new product launch conference in Beijing, and officially released its first independent Redmi brand smartphone, namely the Redmi Note 7. One of the selling points of this handset is the 48MP camera, but it’s supplied by Samsung (Samsung GM1). After introducing the original Note 7, Lei Jun issued another statement, saying Xiaomi will release an upgraded version of the new machine after the Spring Festival, and it will be called the Redmi Note 7 Pro. 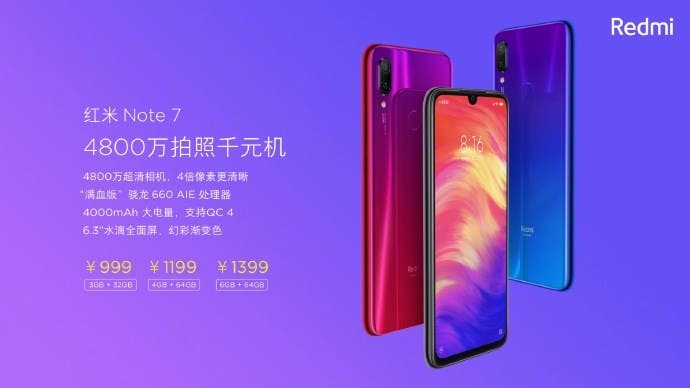 The main difference from the original model will be the 48MP Sony IMX586 photosensitive lens. It’s been previously seen on the Honor V20. He also said that the reason why the original version of Note 7 purchases Samsung’s CMOS is to guarantee the launch on January 15. The 48MP-powered Huawei Nova 4 and Honor V20 are still in the stage of pre-order and they need to be shipped at the end of the month. As for the rest of the features, Lei Jun didn’t disclose anything else and said we will be informed about more features after the Spring Festival. But we assume the manufacturer will add a 128GB storage version and the processor will be upgraded to the Snapdragon 670.

However, it’s deeply believed there won’t be many changes. Thus, most of the features seen on the Redmi Note 7 will be found on the Redmi Note 7 Pro. This simply means it will be packed with a 6.3-inch drop screen with a 1.95mm extremely narrow frame and a Corning Gorilla’s fifth-generation glass cover. There are a 2.5D double-sided glass and a fingerprint module placed on the back. Also, Lei Jun was asked why they are not using the trendier punch-hole screen, he asked not to force them to say the shortcomings of that display.

In terms of hardware, the Redmi Note 7 is equipped with a full-blooded version of the Snapdragon 660 and new graphite negative 4000mAh battery, supporting the QC 4 protocol. As said, on the back, it carries a 48MP camera, which is paired with a 5MP sensor. This AI dual-camera not only supports four-in-one 1.6μm large pixel high-sensitivity mode when shooting in the low-light environment but also comes with Mi MIX 3’s anti-shake option.

Previous Samsung had a 5G smartphone prototype exposed at CES 2019

Next Nokia 6.2 could arrive this month with Snapdragon 632 and a display hole