When the Huawei Mate 20 Pro debuted back in October last year, a very interesting feature was introduced for the first time in smartphones. We are talking about the wireless rever charging system, that would allow users to put another phone, which supports wireless charging, on the back of the Mate 20 Pro, part of the battery’s power on the Huawei’s handset would start to be wirelessly transferred to the other phone. While the feature seems to be very interesting, it still needs to mature in order to be properly used, after all, tests performed by the folks at Phone Arena indicated that the phone was able to transfer only 1% every 10 minutes to a Galaxy Note 9.

Apparently, the very same feature introduced by Huawei will be packed into the Galaxy S10 line. A picture on the Samsung Members Community site shows buttons on a controller that visitors to Samsung demo booth will press in order to view some videos related to the upcoming Galaxy S10 trio. Pushing the button on top plays an introductory video about the upcoming handset. The second button shows off handset’s cinematic display, while the third plays a video teasing the in-display ultra-sonic fingerprint scanner. The fourth button starts a video focused on the triple-camera setup, while the fifth and final button showcases a video related to the handset’s wireless reverse charging feature. 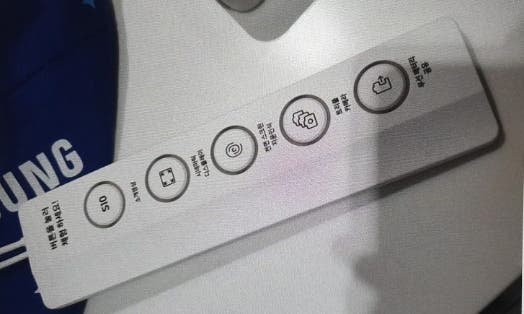 Samsung decided to call the new feature Powershare, and it is not expected to be any faster than Huawei’s solution with the Mate 20 Pro. As result, its usefulness is questionable at the moment, but still, is cool to see companies experimenting new features as long these features do not compromise the usability or pose risks to the smartphone and users. Furthermore there still a concern regarding the battery capacity of the new Galaxy S10 devices, since this particular feature would subtract juice from the handset to transfer to another, a generous amount of battery should be necessary. The most recent rumors indicate that the Galaxy S10E will be equipped with a 3100mAh battery, while the Galaxy S10 will come with a 3,500mAh unit, and finally 4,100mAh for the Galaxy S10 Plus variant. The Mate 20 Pro has 4,200mAh for comparison, and we believe that any amount below 4,000mAh turns the feature questionable. The Galaxy S10 5G variant, in another hand, is said to come with a 5,000mAh battery.

Samsung teasing video suggests that the Galaxy S10 will have new features, including a larger battery or faster charging speed. pic.twitter.com/9fZFZAtncD

The Wireless Reverse Charging System feature on the Galaxy S10 was probably one of the features teased in the Unpacked event teaser. The short video showed the image of a fully charged battery icon that could have hinted at the new phones’ ability to charge up devices that support wireless charging. Samsung’s Unpacked event is scheduled for February 20th. But considering how intense the rumor mill is for Galaxy S10, there are chances that we will get to know all the details of the device even before its release.