Maybe Xiaomi smartphones are not packed with the most powerful camera sensors, but due to the system optimization and various options, they are considered to take very good photos. In this sense, the Mi 8 and the Mi MIX 3 provide the best shooting experience. Especially, this statement is true for the latter. One of the most outstanding camera features of the Mi MIX 3 was the super night scene mode. Later it became known the company will push a few updates to bring this technology to more models. The original Mi 8 was among the first handsets to get it. Recently, the newly announced Redmi Note 7 got this feature. And today, Xiaomi co-founder and president, Lin Bin said on Weibo that they plan to upgrade the Xiaomi Mi 8 SE camera at the end of February to support the super night scene mode. 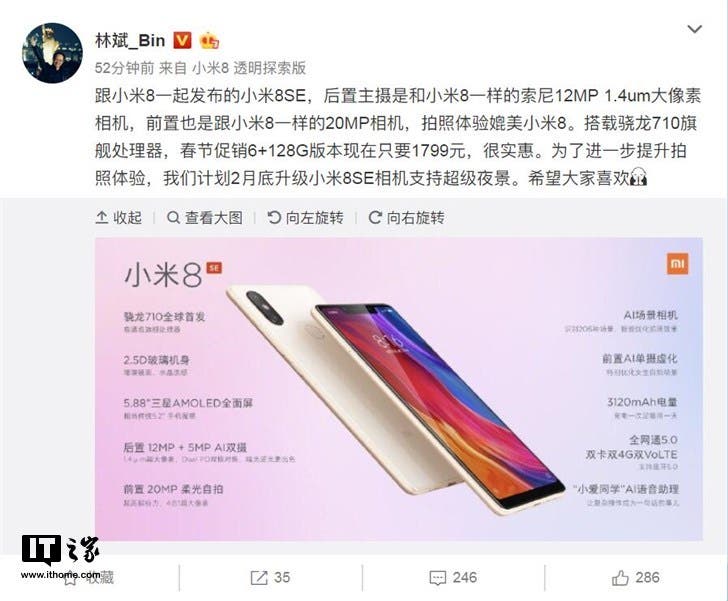 Particularly, Lin Bin said that the Xiaomi Mi 8 SE released at the same time with the Xiaomi Mi 8 comes with the Sony’s 12MP 1.4um large pixel camera. This is the same camera lens like the one on the Mi 8. Moreover, on the front, it also carries the same 20MP camera. Thus, though it sports less powerful hardware and costs way less, the photo experience is comparable to the original Xiaomi Mi 8.

The super night scene mode allows for brighter and more saturated photographs in low light scenarios. The principle is that when the phone shutter is pressed, the camera will take 8 photos with different exposure options at the same time, and select key features for comparison, screen alignment, compensation correction, etc. The photos of the night scenes taken out are cleaner, more transparent and more sensational.

Next HOMTOM invitation for MWC 2019 is full of unspoken promise