According to the statistics of AoweiCloud.com, in April 2018, the total offline shipments of Xiaomi TV outrun all brands and landed on the top in China. In October of the same year, the global shipments of Xiaomi TV exceeded 1 million units for the first time. In 2019, Xiaomi TV continued showing good sales performance. Today, Li Xiaoshuang, General Manager of Xiaomi TV Department, provided interesting data. The latter shows the best-selling models of China’s TV market in the first 6 weeks of 2019, and what’s amazing, the Xiaomi TV has occupied up to 8 positions. 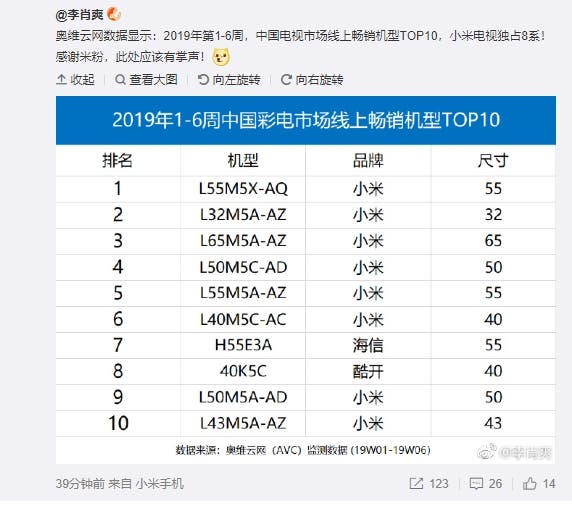 The list of best-selling TVs in China’s market includes various models that have various sizes, from 32 inches to 65 inches. As said, the vast majority is taken by the Xiaomi TV, and only the seventh and eighth places are taken by Hisense and Cool.

Recently, the well-known research data organization Sigmaintell officially released the ‘2018 Global TV Manufacturers Shipment Report’, and the Xiaomi TV was in the list as well, among other top TV brands.

In stark contrast to the Japanese and Korean brands, Chinese TV brands continue to grow. Especially this is true for Xiaomi TV, which shipped 8.93 million units worldwide, of which 7.56 million units were sold in the domestic market, an increase of 180% year-on-year, and 1.37 million units were sent to India. Its global sales increased by 229% during the year. Thus, it has the fastest growth among all TV brands.