The MWC 2019 round of announcements is done for this year’s edition, now it’s time to shift our attention to future launches, and that means that our focus will be put in direction of Huawei, that is about to unveil the Huawei P30 series in the next month. Speaking of which, the two models have leaked today in a couple of renders shared by the known leakster, Roland Quandt.

The renders match closely with previous rumors that pointed that Huawei would drop the wider notch present in the P20 series in favor of a more elegant and fashion styled Waterdrop Notch. Still, in the display aspects, the newer handsets will come with a significantly thinner chin when compared to the last year’s model.

As a consequence of a thinner chin, there’s no room for a home button styled fingerprint scanner below the display, also there’s no signal of it on the rear of the smartphone. So it’s safe to assume that just like Samsung, Huawei has seemingly opted for an under-display solution on the upcoming handsets. However, it’s unclear if these are optical sensors, like the Mate 20 Pro, or if the company will adopt an improved ultra-sonic solution like the Galaxy S10 series. The Huawei P30 Pro should come with curved edges, that look way more premium, but will disappoint the fans of flat-edged smartphones.

Moving to the rear of these devices, the Huawei P30 and P30 Pro are clearly inspired on the last year’s models with vertical camera setups in the top-left corner of the device. However, these sensors have received some significant upgrades over the P20 series. In the case of the P30 Pro, the camera setup includes three separate cameras. One is a regular sensor, while the second camera is believed to be a wide-angle solution which replaces the monochrome sensor used in the P20 Pro. As for the third sensor, the render clearly shows that it’s a square-ish sensor, lifting up the possibility of a periscope-like system to achieve a 10x lossless Zoom, much like the setup debuted by Oppo during the MWC.

The camera should also embrace an improved laser Auto-Focus system with a dual-Tone LED flash paired with a time-of-flight (ToF) camera which can capture depth information in real time. This latter aspect should further improve the quality of the Bokeh Effect, resulting in better “Portrait” pictures.

For the Huawei P30, the Chinese Behemoth should borrow the setup used in the Huawei Mate 20 Pro. If this information is accurate, users should expect a 40MP camera that will come alongside a wide-angle alternative. Furthermore, it does mean that a telephoto lens capable of 5x lossless zoom will replace the more powerful periscope camera. The standard variant also doesn’t seem to be equipped with a ToF sensor.

Under the hood, the devices shouldn’t be too different from the last year’s Mate 20 Pro. They should be powered by the company’s latest Kirin 980, while the details about RAM and Storage are unclear at the moment. Of course, we expect to see variants with slightly more RAM/Storage coming for the Pro model. We believe that the Chinese firm will choose the minimum amount of 128GB of Storage, that will likely support Huawei’s Nano-SDcards too. In regards to the RAM amount, we believe that the standard P30 will come with 6GB, while the Pro model will boast 8GB of RAM. 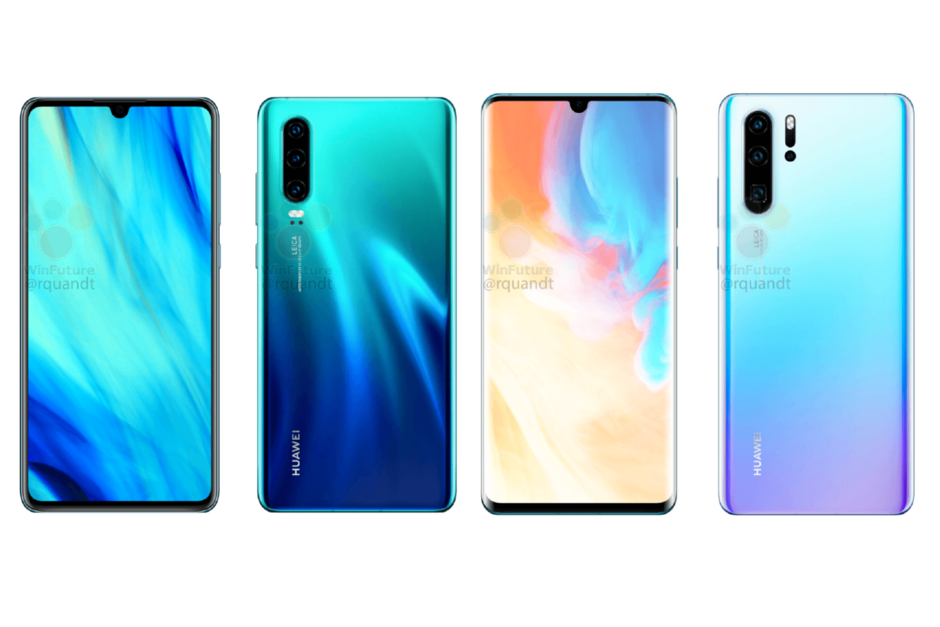 The Huawei P30 and P30 Pro will be unveiled on March 26th at an event in Paris. The pre-orders should start immediately before the shipments the following week. Unfortunately, there are no details about the price of the two handsets, but they won’t be cheap. The exact amount of available color variants is unclear, but considering the leaked renders the devices should come in the usual Black color, as well as Blue Gradient and a light version of last year’s Twilight edition.

Next vivo IQOO leaks in hands-on video and labeled graphic