At MWC 2019, Chinese manufacturer, Huawei, released the Huawei Mate X which is the company’s first foldable smartphone. Today, this device got the CE certification of Rheinland TÜV which is a mandatory entry standard for the European Union. Huawei is the first company to get this certification for its 5G device. The access standard for 5G mobile phones is much higher than that for 4G. 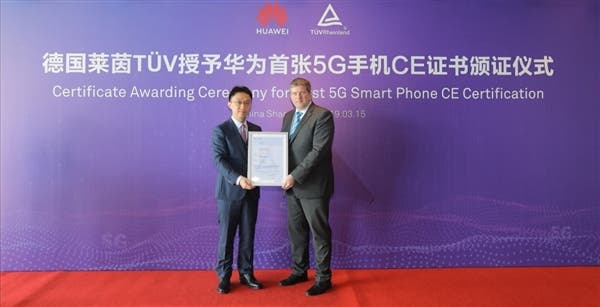 Without CE certification, 5G mobile phones cannot sell in Europe. The Mate X is the first to pass 5G CE certification and it can now demonstrate Huawei’s 5G field ability. This smartphone will hit the market around June this year but it is not cheap. According to the vice president of Huawei’s mobile phone product line, Huawei Mate X is the best. He said, “Huawei’s Mate X comes with a 5G chip, Barong 5000, and also includes 2G, 3G, 4G, chips”. What more network compatibility could you possibly want?

In addition, Baron 5000 and Mate X are the first 5G terminals and chips to support SA and NSA. The chips or mobile phones released by other manufacturers so far only supports NSA networking mode. Only Huawei has both SA and NSA compatible chip/device in the market. This shows that Huawei is the most advanced company in 5G.

It is reported that NSA is used by operators in the initial stage of network construction. It is subject to hybrid networking or non-independent networking. The core network uses traditional 4G networks, and only rely on NSA. As for SA, it is an independent networking mode. Both the base station and the core network are independent larger networks. In addition, the mobile phone interruption under the NSA network consumes more power than the SA terminal. Therefore, for all operators around the world, will eventually evolve to the SA networking mode.