The Chines smartphone vendors are struggling not only with other top brands but with each other as well. In this sense, the battle between Huawei and Xiaomi is too fierce. Both companies are focusing on innovation and, fairly, are considered to be among the leaders in the smartphone industry. They also pay too much attention to optimization. That’s why their smartphones always provide the best performance. Their current flagships of the Huawei Mate 20 Pro and Xiaomi Mi 9 are packed with powerful hardware. So if you wonder which of them scores more in AnTuTu, some users have already found out the answer.

Of course, when it comes to the appearance, these devices look differently. So it’s a matter of taste. In terms of camera, the Huawei Mate 20 Pro is an absolute leader at DxOMark. Although the Xiaomi Mi 9 doesn’t lag behind too much. So the performance remains one of the most important indicators to understand which of them stands out. 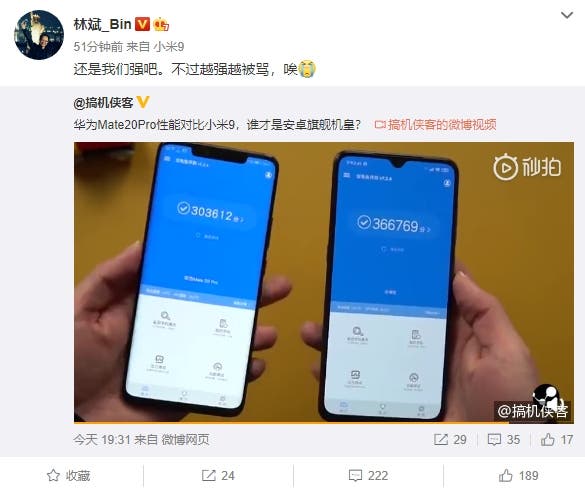 At the launch conferences, the manufacturers provide benchmark scores that sound quite amazing. But they are taken by the test models, and when it comes to the actual performance, the results differ a lot.

Even Xiaomi President Lin Bin commented on this, saying Xiaomi is still stronger. Probably, he would keep silent, if the user didn’t say those two smartphones provide an identical performance.