Foldable display smartphones are becoming a trend for manufacturers. As of now, we are yet to see the market acceptability but it appears that the OEMs are optimistic. Huawei and Samsung already have foldable devices while the likes of Xiaomi and other manufacturers are still developing theirs. A recent report by India Express suggests that Xiaomi will release its foldable smartphone in India between April and June. According to the report, this smartphone will sell for Rs 74,999 ($1091). The irony of the report is that Xiaomi India announced in September last year that it will never sell smartphone above $699. So, is this a change of plan from Xiaomi? or this report is not accurate? 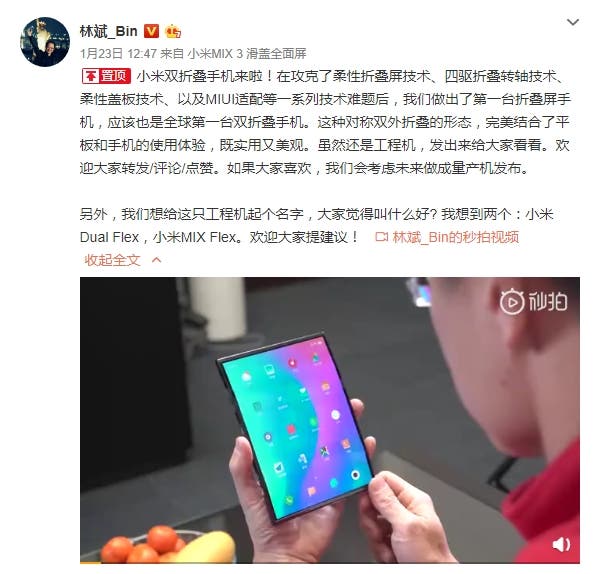 For Xiaomi’s foldable smartphone, Lin Bin and other senior executives have already exposed this device. Sometime in January, Xiaomi co-founder and Xiaomi president Lin Bin showed the Xiaomi dual foldable phone which uses a Visionox OLED display.  This display cost control is cheaper than Samsung, Huawei, and other OEMs, but its “not cheap”.

According to the report, the mobile phone may be equipped with the Snapdragon 855 flagship platform with 8GB or 10GB of RAM, new MIUI system and other features. With Huawei and Samsung’s foldable phones  already available, the Xiaomi solution is worth looking forward to.