Every day is a big day for Xiaomi. Any product launched by this company becomes a bestseller immediately. Today, it launched 20 new products in one breath. And there is every reason to predict good sales for them as well. As for the current products, the newly-announced Xiaomi smartphones are selling like hotcakes. Probably, you are aware of the statement, according to which the cumulative sales of the Xiaomi Mi 9 series devices exceeded 1.5 million units. But this is not the only popular smartphone of the company. The latter issued another statement, saying there were shipped over4 million Redmi Note 7 line smartphones. 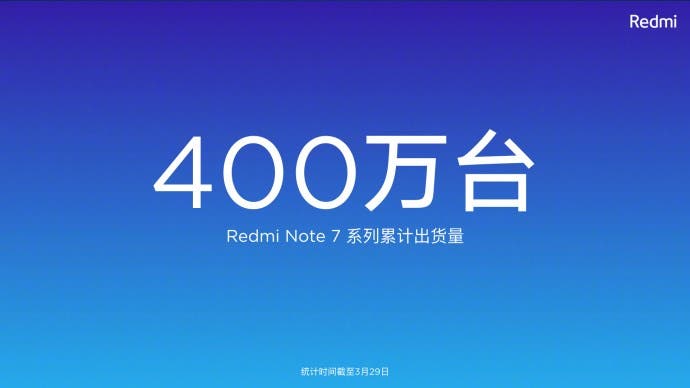 The first model from the Xiaomi Redmi Note 7 was released on January 10. One month later, its sales reached 1 million units. And now, in less than 3 months, this indicator reached the mark of 4 million.

However, this is not surprising. If you remember, all the batches of this handset got the status of ‘out of stock’ quite fast. Though this handset is considered to belong to the mid-range niche, it is considered to be the best alternative to the Xiaomi Mi 9 SE. The biggest difference is NFC support. Almost all of the rest features are inherited from the top-notch models. So for a song, you can get your hands on a smartphone that looks and acts like a flagship.

Redmi is an independent brand now. So this achievement is a good sign the brand is moving on the right track. Though there are not many smartphones coming our way from this new brand, it’s promised we will be able to get our hands on a genuine flagship powered by the Snapdragon 855 soon.