More than a week after it received certifications from Bluetooth SIG and Wi-Fi Alliance, the Samsung Galaxy A20e with the model number SM-A202F/DS has been certified by the FCC in the United States, suggesting it could soon be launched, perhaps at the Galaxy event tipped for April 10.

As expected,  the very little information revealed by the Federal authority suggests the A20e could arrive as a watered-down variant of the Galaxy A20. Available documents from FCC say the A20e will come in at about 147.4 x 69.7mm, while it will come fitted with a 5.8-inch screen of unknown resolution, though there are chances it will sport an HD+ panel with a 19:9 aspect ratio.

That is about all the notable details we could glean from the FCC listing, as the Authority usually isn’t a reliable source of major leaks, other than mere certification. However, previous leaks and renders suggest the Galaxy A20e might have striking similarities with the A20, while a Geekbench report has it that the device could come with an Exynos 7885 SoC, 3GB RAM under the hood. A fingerprint sensor, as well as a dual rear cam, are expected to adorn the rear, while it is tipped to come with a 3000mAh battery with 15W fast charging and boot Android Pie out of the box. 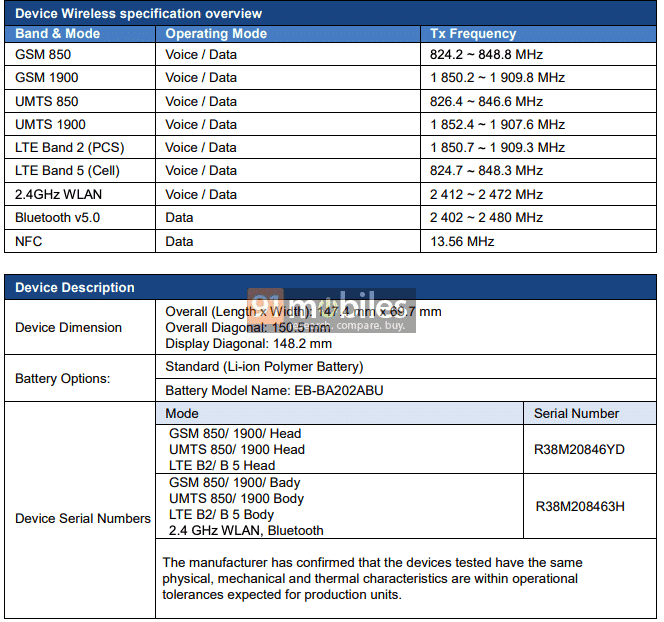 We are not sure exactly when it will go official, though there are speculations it will launch alongside some other Galaxy devices on April 10.

Next ASUS Phone with SD 855 shows up on AnTuTu, is it the ZenFone 6Z?