Yesterday, Meizu made a furor by launching its much-talked and –anticipated smartphone, namely the Meizu 16s. This handset is considered to be the enhanced variant of the 16th series. The improvements refer to all aspects, including the appearance. But unfortunately, only a day has passed before we got the photo of the first broken 16s.

As we can see, the first Meizu 16s that was broken and broke the hearts of many users is the white variant. But what’s interesting, as the phone will go on sale only on April 28, we suppose this is the unit sent to the media for review. Anyways, as a result of dropping, the handset’s back glass is completely broken. 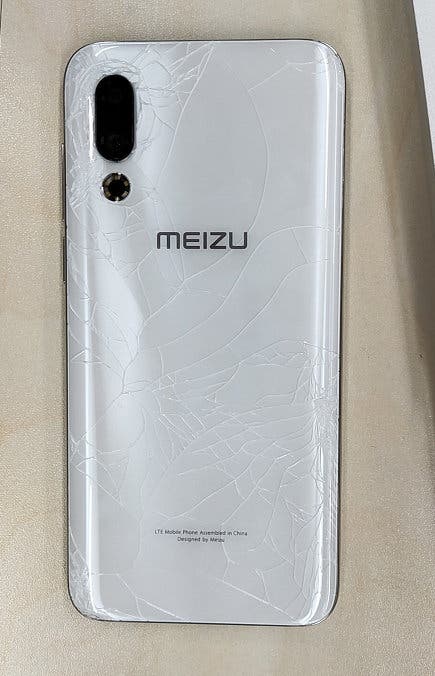 To understand what a smartphone we are dealing with, let’s recall its key features. The Meizu 16s continues the 16th series’ bang-free symmetrical full-screen design. Its screen size is 6.2 inches, the resolution is 2232×1080, and the screen ratio is 91.53%. Shortly, this is phone has the highest screen share among the Meizu phones.

Under the hood, the Meizu 16s is equipped with a Qualcomm Snapdragon 855 flagship platform. The highest version comes with an 8GB memory and a 256GB internal storage. There is also a front-facing 20MP selfie shooter, a rear 48MP + 20MP dual-camera, of which the 48MP main lens is the Sony IMX586. The latter supports four axes OIS. And it is packed with a 3600mAh battery.

Previous Huawei Y5 2019 is official: 5.71-inch notched display with a leather back