On April 25th, Smartisan OS was officially acquired by Beijing Big Eye Star Technology Co., Ltd., a 100% holding company of Byte Beating Subsidiary, which should mean the company that has been swimming in rough waters in the past years isn’t dead yet.

However, this did not mean a new Smartisan phone was necessarily coming though, as the current state of the company is quite unclear.

Fast forwarding to today, Zhu Haizhou, the product manager of Smartisan Technology, replied to a question from an user on Chinese social Weibo, revealing that the Smartisan mobile phone is still under development.

When the user asked “Is there going to be a new machine for this year?”, Zhu Haizhou did indeed answer “Yes, but it will take a little longer”.

So, basically, albeit the company has been very quiet in the past months and everybody thought they were close to bankruptcy, this new revelation gives us hope a new phone may still come in the following months. 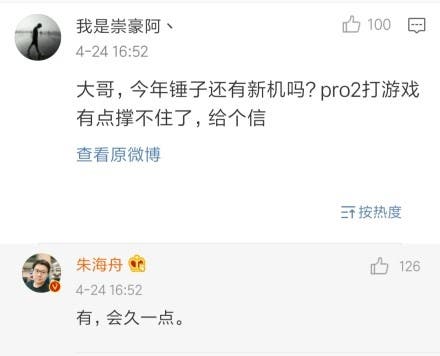 Another user instead asked “Now that Smartisan OS has been acquired by another company, is the OS no Smartisan’s property?”. To this question Haizhou answer that it depends on who will be chosen as director.

What do you guys think about Smartisan? Are you a fan of the company? Let us know down below!