On May 14, Xiaomi Global Vice President Manu Kumar Jain announced on Twitter that the Redmi Note 7 series has achieved great success in the Indian market. Particularly, he said they had shipped over 2 million units of the Redmi Note 7 and the Redmi Note 7 Pro in 2 months. However, what’s more interesting, Manu Kumar Jain said that those who liked the 48MP camera on these models can wait for an identical lens to appear on a Xiaomi phone. This caused a huge stir. Many users think he was talking about the upcoming Xiaomi Mi A3.

Also Read: Xiaomi Mi A3 Could Be In Development

Before Manu Kumar Jain revealed this news, from his previous post, we learned Xiaomi is going to launch a new smartphone in India, and this handset will be packed with Qualcomm’s latest Snapdragon 7 series mobile platform. This made many users and media think Jain is talking about the Xiaomi Mi A3. Plus, it’s thought the new platform will be the Snapdragon 730. 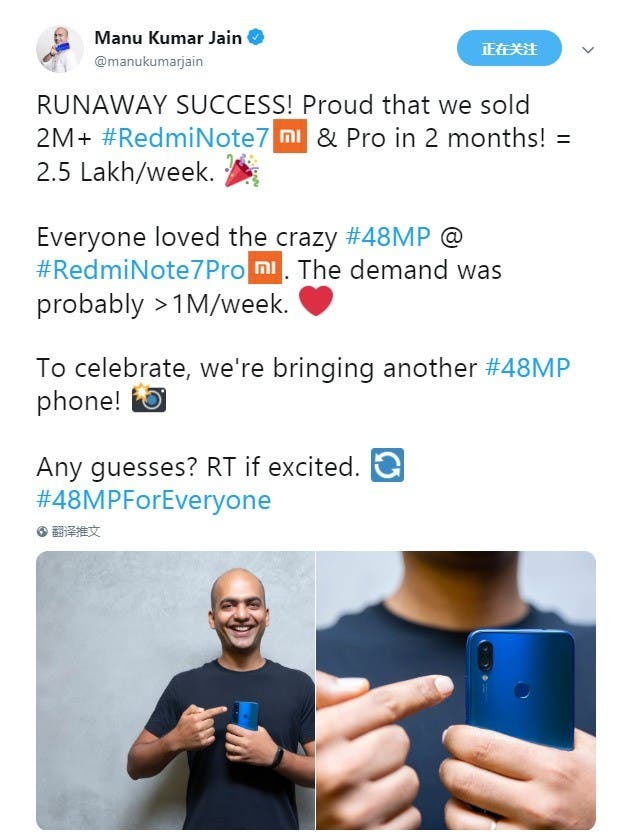 It is worth mentioning that the Xiaomi A series comes with native Android system out of the box and the built-in Google Assistant smart voice assistant. It belongs to the Android One mobile program.

Next OnePlus 7 announced with a compelling £499 price tag