Lenovo has recently released the Lenovo Z6 Pro flagship smartphone last month featuring the almighty Snapdragon 855 chipset and a Quadruple-Camera setup. Now, the company is gearing up to reveal its toned down version variant of the Z6 dubbed as Lenovo Z6 Youth Edition on May 22.

The new handset is already up for pre-orders on the company’s official website ahead of tomorrow’s announcement. According to the listing the Lenovo Z6 Youth Edition is indeed coming with triple rear cameras, waterdrop notch display, and a dual-frequency GPS. Furthermore, the smartphone will feature a beautiful gradient design. 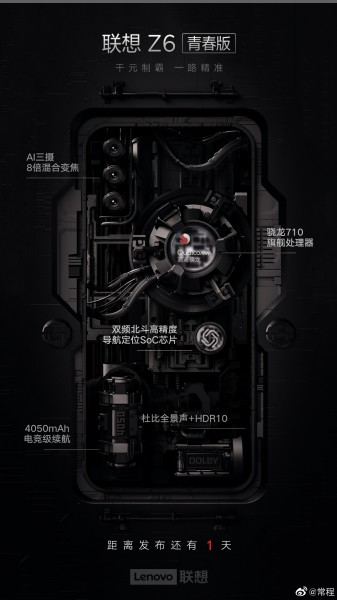 According to the listing and previous leaks the smartphone will ship with HDR10 and Dolby Atmos support. It is expected to come with Android 9 Pie straight out the box and a big 4,050mAh will ensure a long day of usage. This battery will be charged via USB Type C port. Regarding the quadruple camera sensor, Lenovo VP Chang Cheng shared an image on Weibo which confirms the specs above and the support for 8x optical zoom.

Despite previous rumors about the presence of a newer Snapdragon 730, the Chinese smartphone will be powered by the last year’s Snapdragon 710 that still is rock solid in terms of performance but may disappoint if Lenovo prices this handset too high. When it comes to pricing, availability and the rest of the hardware inside the Z6 Youth Edition, we expect to see everything tomorrow during the launch event.