Motorola seems to be prepping quite a number of budget smartphones, in a move that appears it is defocusing on the premium segment. It already announced the G7 series, and more recently the Moto Z4, and from the look of it, a few Android One smartphones as well as the next generation Moto E series (Moto E6) are also in the making.

We first got the hint earlier in April from a tipster that the Moto E6 might ould be similar to the Moto E5 in many ways, but perhaps a downgrade in others, and now, we have the first solid evidence that the official launch might not be far off. The Moto E6 Plus has just appeared on Geekbench revealing its key specs. Per the listing, the Moto E6 Plus is set to arrive with the 12nm MediaTek Helio P22 octa-core processor clocked at 2.0 GHz, and that is mated with 2GB RAM, and of course, will boot Android Android 9 Pie out of the box.

The Lenovo owned company upped the screen on the E5 Plus to 6-inches, up from 5.5-inches of the E4 Plus, so one would expect the E6 plus to still retain the same display as the E5 Plus. 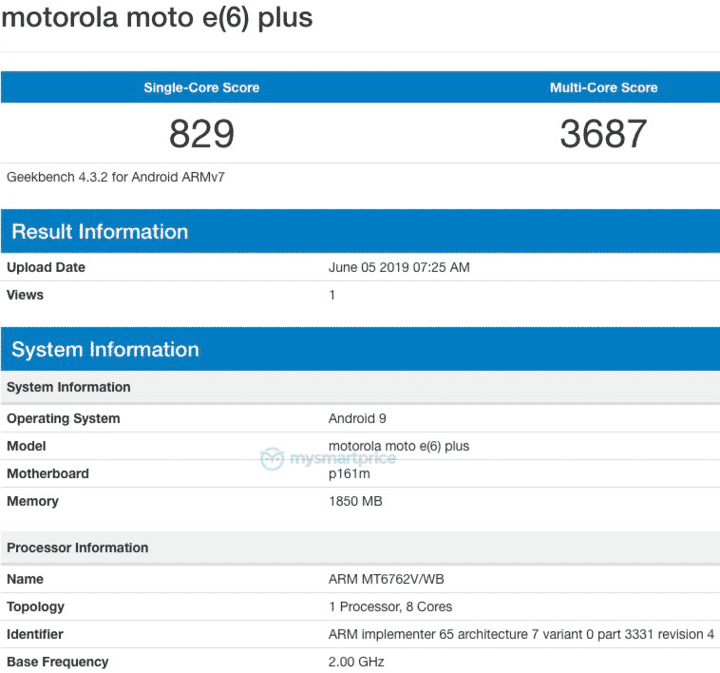 The standard Moto E6 on the other hand as per already leaked info is expected to get the Snapdragon 430 coupled with 2GB of RAM and 16GB. While the E5 has a 5.7-inch screen size, the Moto E6 is expected to come flaunting a more compact display – at  5.45 inches, though there is no guarantee the leak is correct.

Talking of the launch date, Motorola has always maintained a yearly update circle, so we expected the Moto E6 series to be made official soon, given that it is been over a year since the Moto E6, E6 Plus, and E6 Play to went official.