Xiaomi sub-brand Redmi recently launched its first flagship aimed squarely at the Oneplus 7 Pro in its home market, China. It includes the Redmi K20 and the K20 Pro. The SD 855powered Redmi K20 Pro went on sale for the first time in China earlier this month, with official info claiming the company sold 200,000 units of the newly launched smartphone in just 1 hour and 45 minutes.

The K20/ K20 Pro is still exclusive to China but could be landing in India soon, and in the international market in the coming days. Ahead of its debut, outside of its homeland, Xiaomi backed Redmi has pushed out the first ever OTA update to the Redmi K20 Pro via the MIUI 10.3.8.0 stable update.

The update weighs in at 329MB and brings the Face Unlock feature to the so-called flagship killer 2.0, and while the feature is a much welcomed one, Redmi however, warns that this feature isn’t as secure as PIN/Password/Pattern and a similar-looking person can unlock your phone. And given that the feature only relies on the front camera to unlock your phone, it is quite possible a photo of you will probably also work.

Aside from the Face unlock, the update also introduces three customizable lock screen clock styles and Wi-Fi list sorting by signal strength to the K20 Pro. With the update, the new lock screen is said to have lost support for third party themes going forward. 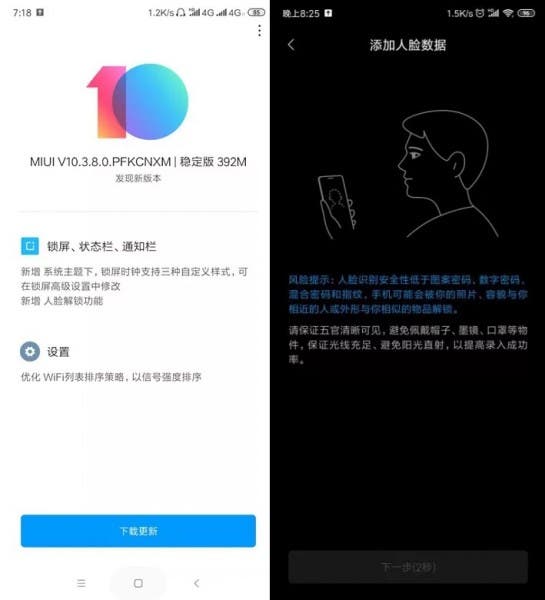 The update is currently rolling out to users of the Redmi K20 Pro inChina, so it will probably be available to the device out of the box when it launches in India in the coming weeks, and also to the Xiaomi Mi 9T Pro, assuming the K20 Pro is launched for other markets as the Xiaomi Mi 9T Pro as rumored. The Indian launch is tipped for July 15, while it is due to launch in other markets on Mi 9T Pro on June 12.

Next Xiaomi Mi 9T Pro is a rebadged K20 Pro, Geekbench confirms too