Samsung mobile held a launch event back on April 10, and while we all thought the event would be headlined by the Galaxy A90 launch, that never happened. Instead, the Samsung Galaxy A80 took the glory with its unique pop-up and rotating mechanism for cameras.

Well, the Galaxy A90 isn’t completely out of the equation, reports emerged earlier yesterday that the device is still well in the making and that it will get a 32MP primary rear camera with 5G, and what is more, it will support 45W charging. The Galaxy A90 is allegedly being tested in S.Korea with the model number SM-A908N, in 5G model, and perhaps a non-5G variant. 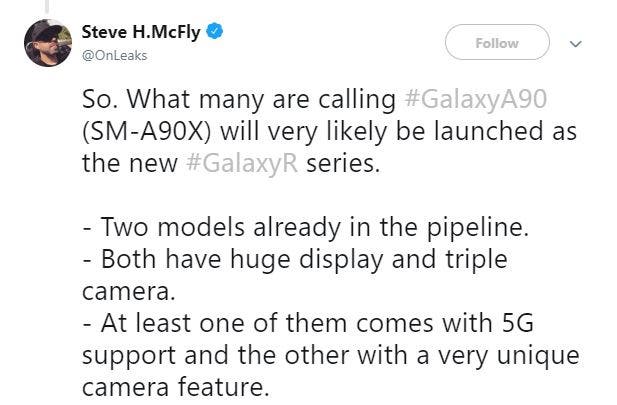 Details are still sparse, given that Samsung has yet to confirm the report. However, @Onleaks report that two models of the phone currently been tested, both having huge displays & triple rear cameras. Corroborating previous leaks, one of the duo will be 5G enabled, while the other with no 5G will get a unique camera system. The Galaxy S10 already launched with punch hole design, and the Galaxy A80 with a unique pop-up and rotating mechanism, so we can only imagine what more unique camera solution the said device under the new Samsung Galaxy R series will get.