Recently, Xiaomi revised its smartphone business and left only three series of the original Mi, MIX, and the new CC. Thus, the Max and Note lines have been excluded from the list. The annual flagship from the MI line has been already out. In the future, we may see some variations. But no new model is expected to be uncovered this year. As for the CC line smartphones, the first model is already ready. Its launch is not around the corner. So what about the MIX series? The current models from this family completely changed the way we had been thinking of the MIX line smartphones. It’s a slider. But this could be changed today. The company’s Weibo channel published a poster, saying they will issue a statement tonight at 10 PM. 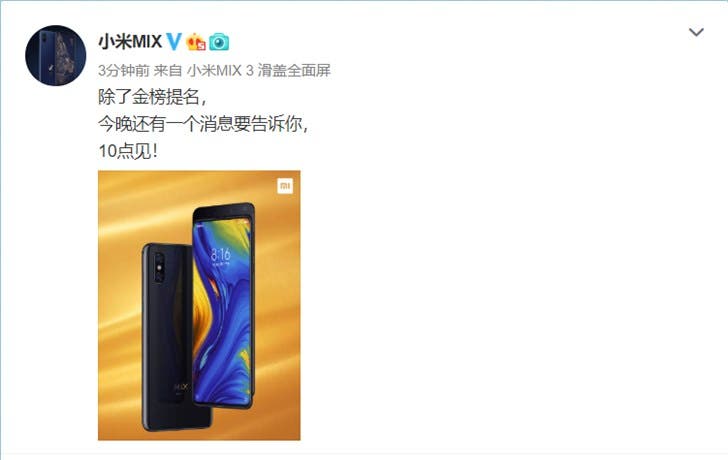 This poster caused a lot of stir. Some users think the manufacturer will cut the prices of the Xiaomi Mi MIX 3 once again. The other group of users is sure today we’ll learn about the Xiaomi Mi MIX 4. We think the Mi MIX 3 will get a new version. Probably, Xiaomi has cooperated with a museum or a cultural center, and they decided to create a customized version of this phone.

As a reminder, the Xiaomi Mi MIX 3 adopts a sliding full-screen with a magnetic power design. The front panel carries a 6.39-inch FHD+ AMOLED screen, with a screen ratio of up to 93.4%. The bottom is shortened by 4.46mm. Thus, the screen occupies almost the entire front panel. The phone thickness is 8.46mm and it weighs 218g.

At the same time, the company has chosen the highest configuration of Snapdragon 845 845+10GB+256GB. This is the world’s first 10GB large memory phone. It also sports a built-in 3200mAh battery, which supports 10W wireless fast charge. On the side, we can find an exclusive button to interact with the phone through Xiao Ai voice assistant.

The Xiaomi Mi MIX 3 is also packed with a rear AI dual-camera as well as a front-facing 24MP soft light dual-camera. Due to such a powerful camera module, it scores 108 points at  DxOMark.