Fortunately, the first-ever detail of the upcoming foldable Razr phone has appeared online and we’re here to help you go through it.

Unlike Samsung and Huawei, Motorola is planning to focus on the mid-range segment of the foldable smartphone market. As per the recent report, the official launch of the Razr foldable phone will happen somewhere in the month of December this year. The Razr foldable phone will first land in Europe and then will make its way to the US market. The device will arrive with a price tag of $1500 for the US and EUR1500 for Europe.

There is no information on whether the smartphone will make its way to the rest of the market or not. Since it is the first-ever report of this device, there is a high chance that Motorola might change the pricing and launch date altogether. 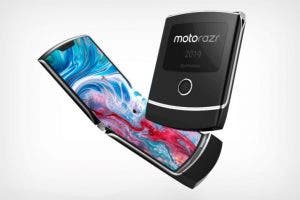 The upcoming Motorola Razr phone is expected to come with a large flexible display. The device will fold the way traditional Razr phones did. Instead of the tablet, the Razr phone when unfolded will result in a large smartphone making it a compact smartphone. As you can see from the renders above, the smartphone will have a small display on the outside. The secondary display will display the notifications, time and other small details.

These concepts render images are created by Sarang Sheth of Yanko Design. The final Razr foldable design should look pretty close to this renders. As per the report, Motorola is focussing more on design rather than the performance with its first-ever foldable smartphone. In fact, you should not expect a huge battery to be packed inside at all. This might lead to the same thin Razr form factor which we earlier used to see.

As per the previous rumours, Motorola Razr Foldable phone is expected to run on the Snapdragon 710 chipset. Likely, the device will sport 4/6GB of RAM, 64/128GB of internal memory and a smaller 2,730mAh battery. The device is expected to feature a 6.2-inch display panel on the inside with a resolution of 876×2142 pixels. The outer display, on the other hand, will settle for 600×800 pixel resolution. If all goes well according to the leak, we might see Razr phone in stores by the end of this year.