Motorola has already launched numerous smartphones under its Moto One lineup in the past couple of months. It seems like the smartphone maker is now gearing for the next device in the series dubbed Motorola One Macro. Not a while ago, the device was leaked revealing its design and key information on the powered chipset. Well, the smartphone has now appeared on the leak mill once again and this time it is one step close to the official reveal. 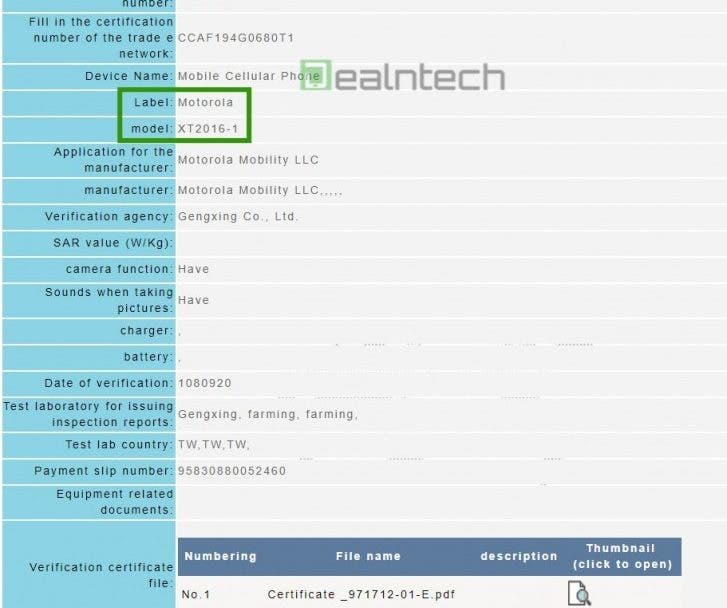 Earlier today, Motorola One Macro was spotted on the NCC listing meaning the device has finally got the necessary NCC certification. The device appears in the listing with the model number Motorola XT2016-1. For those who’re unaware, it’s the same model number that recently appeared in the NBTC certification. That very same certification indicated towards the Moto One Macro moniker. As expected, the NCC certification doesn’t really reveal much about the device. The listing revealed the full 4G frequency support for Taiwan along with WiFi and Bluetooth connectivity which is quite obvious.

Thanks to the previous leaks, we can speculate the specification of the device. Motorola One Macro should come with an HD+ display featuring a waterdrop notch. The device is going to run on the MediaTek processor (either Helio P60 or P70) paired with up to 4GB of RAM and up to 64GB of onboard memory. The device will feature a single rear camera along with a 4,000mAh battery. In terms of software, the device will run on the Android One platform hence the name. It is worth mentioning that the device might come with a special mode for macro photography considering the word Macro in the moniker.  Apart from these, there is not much information on the device but that can change soon since the device is ready for official release.

As mentioned earlier, the device has received NCC certification in Taiwan meaning the brand might launch it sooner than expected. Motorola One Macro will first hit the Taiwanese market hopefully and then might make its way to the rest of the major markets.