HMD Global is no doubt one of the few trusted names to rely on when it comes to delivering timely OS updates. The firm right after the arrival of the Android 10 released an Android 10 Road map for its smartphone lineup. It already pushed out the Android 10 Update to the Nokia 8.1, and it appears another Nokia device is up in line.

The next Nokia smartphone to receive the update might be the flagship Nokia 9 Pureview. While we have no official words confirming the Android 10 update roll out, the Nokia 9 Pureview has been spotted on the popular Geekbench site running Android 9.

To recall, the Nokia 9, much like a number of HMD Global branded Nokia phones ships with Android One’s version of Android 9 Pie pre-installed. And that perhaps expalins the fast and timely manner it seeds out updates to its smartphones.

A report from Counterpoint Research revealed that up to 96% of HMD’s Global smartphones have been updated to Android 9 Pie, and with a promise to push it beyond tas it aims to push out Android 10 for most of its devices by early next year. 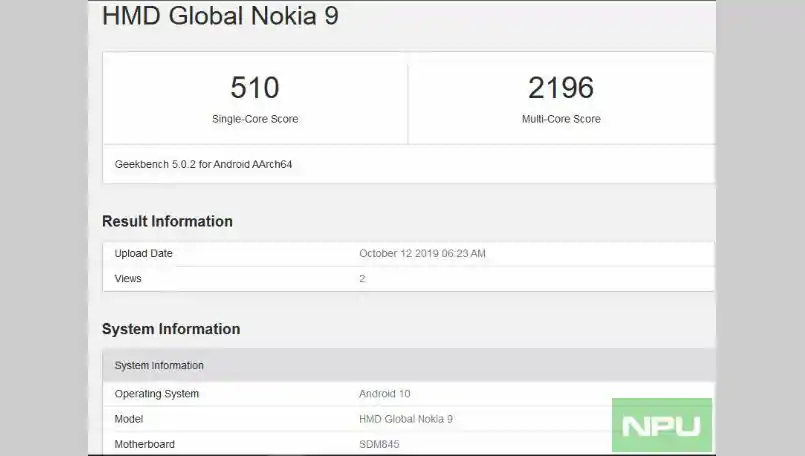 Other than the Nokia 8.1 that already received the Android 10 update, the firm already confirmed that the Nokia 9 Pureview, as well as the Nokia 7.1,  will get Android 10 updates in the last quarter of 2019. The update will, however, come in no particular order, but the 9 Pureview might be the next given that it is already been tested on Geekbench.

Previous Redmi 8 and Redmi 8A launched in China, start at $99

Next RedmiBook With AMD Processor To Be Announced On October 21