At the beginning of this year, Xiaomi announced its strategic cooperation with Meitu. The latter is known for its selfie-centric smartphones. As a result, Xiaomi cut off some of its favorite smartphone lines and brought a new one called CC. The first models of this series are already out and they have become quite popular. So it’s the right time to bring a new model before the beginning of the shopping season. Today, the manufacturer published a poster with the words ‘100 million’. Undoubtedly, this refers to the company’s 100MP camera. So it’s logical it will appear on a smartphone that is aiming at the mobile shooters. As you guess, the new phone that is going to hit the market tomorrow is the much-rumored Xiaomi CC9 Pro. 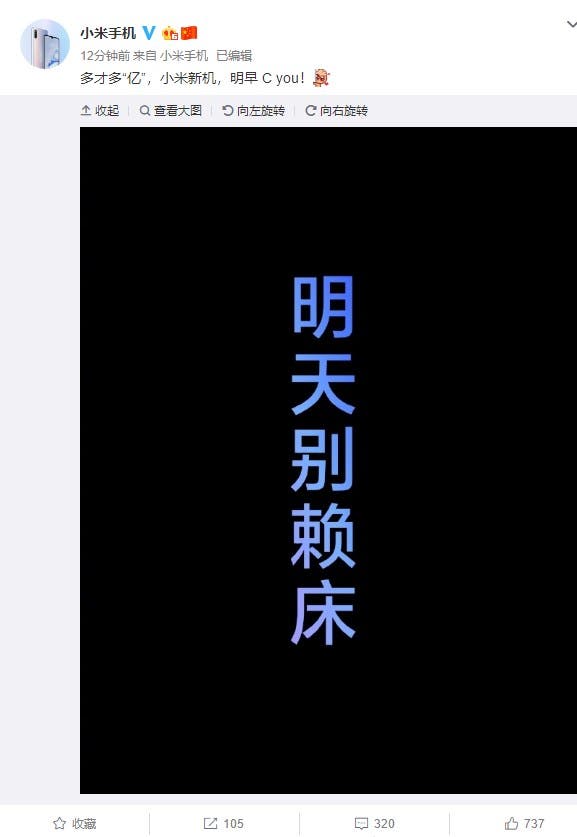 The Xiaomi CC9 Pro has leaked on a number of documents and photos. So we know about its key features more or less. It’s expected to come with a 108MP sensor. In fact, the first smartphone powered by this CMOS is the Xiaomi Mi MIX Alpha 5G. If you remember, this smartphone comes with a surround screen and there is only a strip placed vertically from top to bottom. That strip carries a 108MP camera. But this is a concept phone, and even if it’s released, the price should be 19,999 yuan ($2830). Thus, this phone won’t be available for most customers.

On the contrary, the CC series smartphones cost quite affordably. And even if it is packed with a 108MP camera, this phone will be still priced normally.

The upcoming Xiaomi CC9 Pro has already passed EEC certification. And we know, apart from the 108MP camera, it will also sport a Qualcomm Snapdragon 730G processor and support 30W fast charge.