Back in the last year, we’ve seen the advent of waterdrop notches to fix the design crime made by Apple and its original iPhone X in 2017. This year, however, it was time for the pop-up camera screens to gain traction in the market. Since the demand for bezel-less screens isn’t going anywhere, seems that the next year will be marked by the arrival of under-display cameras. The Chinese firms Xiaomi and Oppo already have shown working prototypes with it. We also know that other giants of the industry are also testing it on their labs. Now, a patent suggests that Essential is also playing with this new concept technology.

Essential has been keeping a low profile since the launch and demise of the Essential PH-1. Andy Rubin’s company popped out in 2017 and was the first smartphone to ship with a notch solution. It didn’t sell really well for several reasons including the poor performance of the cameras and the elevated price tag. Since 2017, fans of the company have been waiting for a proper sequel. The company didn’t end its business, but also didn’t mention when a new smartphone will come. Despite this, Essential is filing patents to keep some ideas safe. 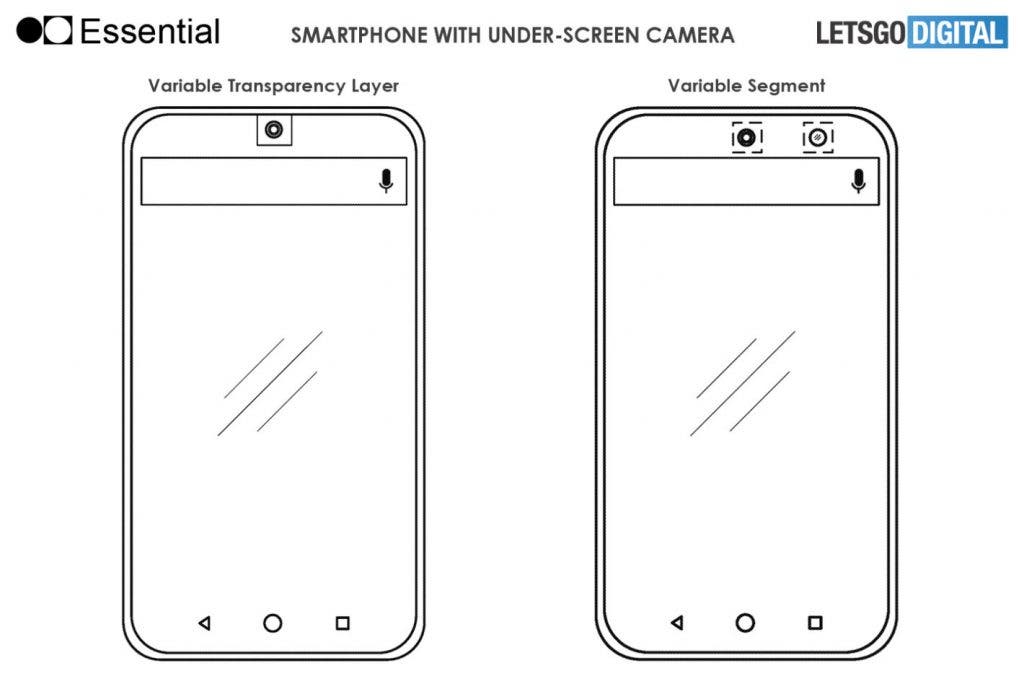 The American company has filed a patent at the United States Patent and Trademark Office titled Optical Sensors Disposed Beneath The Display Of An Electronic Device. These patents come to confirm rumors that surfaced earlier this year suggesting the Essential PH-2 arrival with this technology.

The referred patent was applied on October 17 and reveals that the upper part of the display will have an area with variable transparency. We believe that this transparency will be adjusted always that the user requests the selfie camera mode. While we don’t know how Essential plans to put this technology in an actual product, but it sounds promising.

For now, we should take this with a grain of salt. After all, patent applications don’t necessarily mean that there is a product in development. As we mentioned before, they can be just a way to save ideas for the future. For now, rumors indicate that Essential is planning a comeback with a device that boasts a punch-hole camera and has an unusual look.

Previous Moto 360 Smartwatch is back, but not thanks to Motorola