Xiaomi first launched the Redmi Note 8 Pro in China in the month of August. Later, the phone made its debut in Europe and India in the following months. And now, it gets a new 8GB + 256GB model in China priced at 1899 Yuan(approximately $270).

Apart from more RAM and internal storage, the new variant of the Redmi Note 8 Pro does not bring anything new to the table. Hence, it is powered by MediaTek Helio G90T, a gaming-centric mobile phone SoC with Mali-G76 MC4 GPU. The front of the phone comes equipped with a 6.53-inches FHD+(1080 x 2340 pixels) IPS LCD panel with Corning Gorilla Glass 5 protection. There exists a dew-drop notch at the top housing a 20MP selfie camera with f/2.0 aperture lens. 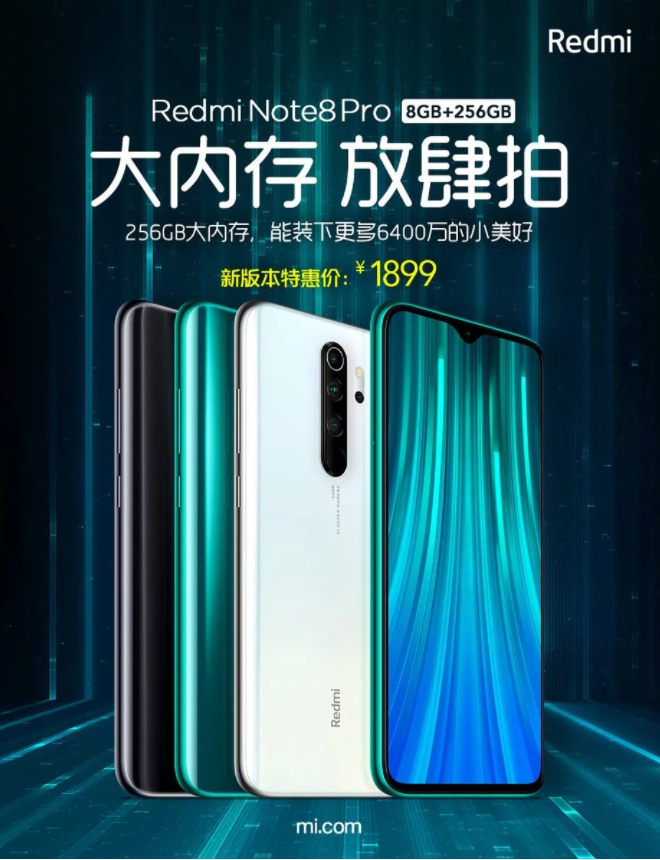 The Redmi Note 8 Pro also has Gorilla Glass 5 at the back with a plastic frame that mimics metal. The back of the phone features a quad-camera array and fingerprint sensor below it. The cameras on this phone are another selling point as it comes with a 64MP primary sensor with an f/1.9 aperture lens. Other sensors include an 8MP unit with an f/2.2 ultra-wide lens and two 2MP modules with f/2.4 aperture lens for macro shots and depth sensing.

Like any other Xiaomi phone, it runs MIUI 10 based on Android Pie with MIUI 11 already rolling out to some users in India ahead of schedule. Though the latest variant of the phone comes with 256GB of internal storage, users can further expand the storage via the dedicated microSD card slot. Last but not least, a large 4,500mAh battery runs the device with support for 18W fast charging.