Though Google periodically launches new versions of its mobile operating system, the device manufacturers do not manage to bring new features to all of its users. Moreover, those who get the new versions, do that way later after many delays and after a few beta versions. This is also true for Xiaomi users. Though the manufacturer has started testing the MIUI11 beta version for the Xiaomi Mi MIX 3 back in October, the MIUI11 Stable version based on Android 10 is available for download only now. So all Mi MIX 3 owners can check for system updates. 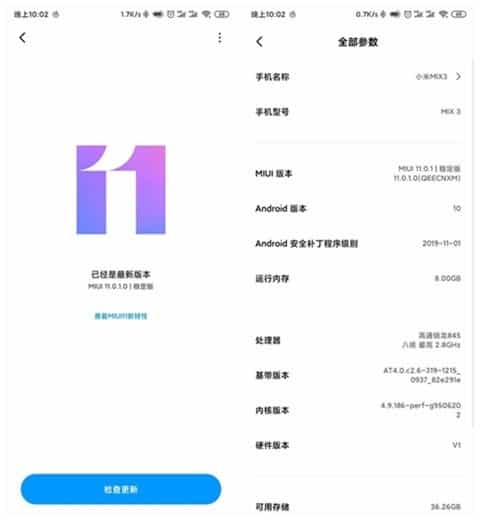 Apart from many bug fixes, MIUI 11 brings a mature modern design style. Plus, there is a Vientiane breath screen, added dynamic font system and dynamic natural sound system, Mi Work kit, and Mi Go travel kit. Other changes include new functions such as quick reply, new game mode and so on.

By the way, the Xiaomi Mi MIX 3 has been included in the list of Mi smartphones that will get the MIUI11 Stable Version update first. Besides it, the other 11 models are the Mi 9 SE, Mi MIX 2S, Mi 8, Mi 8 Lite, Mi 8 Explorer Edition, Mi 8 Pro, Mi 8 SE, Mi Max 3, Redmi K20, Redmi Note 7 Pro, and Redmi 7. As you can see, Xiaomi is trying to bring the latest Google OS version not only to its Mi series models but to the Redmi handsets as well. Although we should note that these Redmi smartphones were launched when Xiaomi and Redmi weren’t operating as separate brands.