Recently, Micron announced that it is the first to deliver the world’s first mass-produced low-power DDR5 DRAM chip. The Xiaomi Mi 10 series will have the honors of launching this chip for the first time. Subsequently, Xiaomi confirmed that its upcoming flagship will not only use Micron’s LPDDR5 memory but also Samsung’s LPDDR5 memory. This morning, Samsung officially announced its LPDDR5 memory. When compared to LPDDR4X memory, the bandwidth increased by 29% and the power consumption reduces by 14%. Samsung said in its Weibo announcement 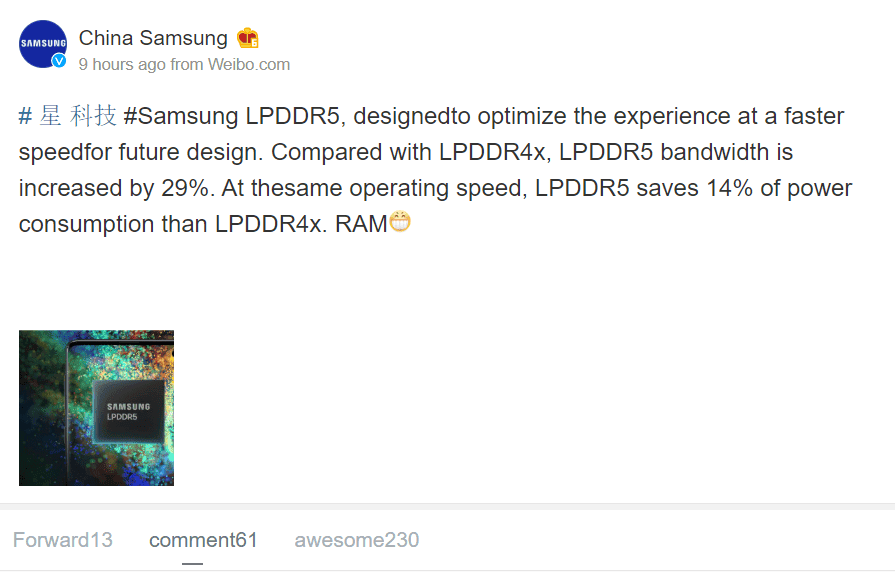 “Samsung LPDDR5, designed to optimize the experience at a faster speed for future design. Compared with LPDDR4x, LPDDR5 bandwidth is increased by 29%. At the same operating speed, LPDDR5 saves 14% of power consumption than LPDDR4x. RAM”

As early as July last year, Samsung announced the mass production of the world’s first 12Gb LPDDR5 DRAM, which has been optimized for 5G and AI functions in future smartphones. In addition, Samsung began mass production of 12Gb LPDDR5 packages last year, each package containing eight 12Gb chips, reaching a total of 12GB. This is to meet the needs of high-end smartphone manufacturers for higher smartphone performance and capacity.

Previous Crash Bandicoot is coming for Android: this is how the game looks