LG is finalizing the details for the next presentation of its new high-end smartphone, and everything indicates that this time it will not be a model of the G line that we see first in the market. The LG V60 ThinQ 5G seems to be taking the lead to reverse the releases, leaving the G models for the second half of the year, contrary to what was done so far.

This LG V60 ThinQ 5G has not leaked much so far but there are some known details that we can consider before the official presentation. The smartphone has visited the Geekbench portal, revealing that its processor will be the Snapdragon 865, which few doubted, but there is more associated data to it. 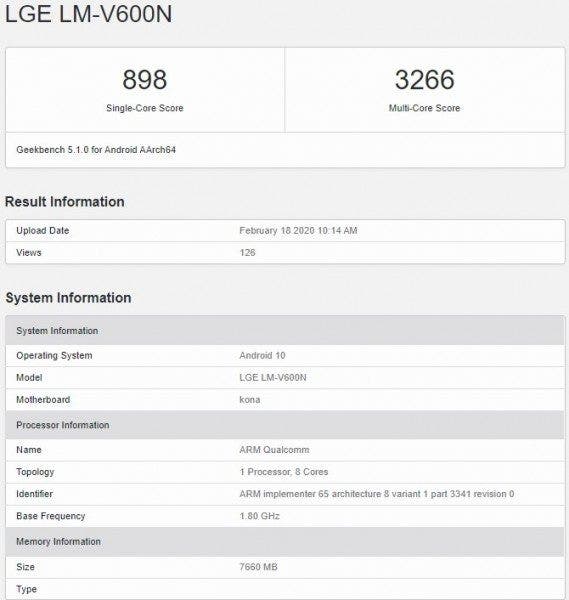 According to Geekbench database, the future LG V60 ThinQ 5G has the Snapdragon 865 in command of operations. That guarantees, among other things, that the Korean phone will have 5G connectivity both under SA and NSA networks.

In addition to this, we see that the model subject of the test mounts 8GB of RAM. We will see what happens finally and if we see more variants in circulation. We have no details regarding the storage space but with the V50 ThinQ 5G last year we already had 128GB of internal storage in its basic and unique model, along with an additional microSD.

Also, some previously leaked data have told us about four rear cameras and a considerable battery of 5,000 mAh, 25% more than the 4,000 mAh offered by the V50 ThinQ 5G last year. So this new device could well stand out for its prolonged autonomy. The USB Type-C port and the headphone jack complete the round of leaks so far although, as in previous generations, we also expect good sound equipment attached to the phone.