A few years ago, Xiaomi released the first MIX series smartphone, starting a new era in the smartphone industry. If you remember, it came with a genuine full-screen. But what’s more important, that time, the company introduced a few innovative technologies that make this possible. The second-generation MIX line handset was the polished version of its predecessor. And as for the third model, it wasn’t welcome well. But recently, Xiaomi introduced the MIX Alpha, which breaks all the boundaries of our imagination. As for today, a patented design called ‘Xiaomi MIX 2020’ was exposed on the Internet. It is not only using the dual-screen design concept but also maintaining a fairly high screen ratio on the front of the phone. 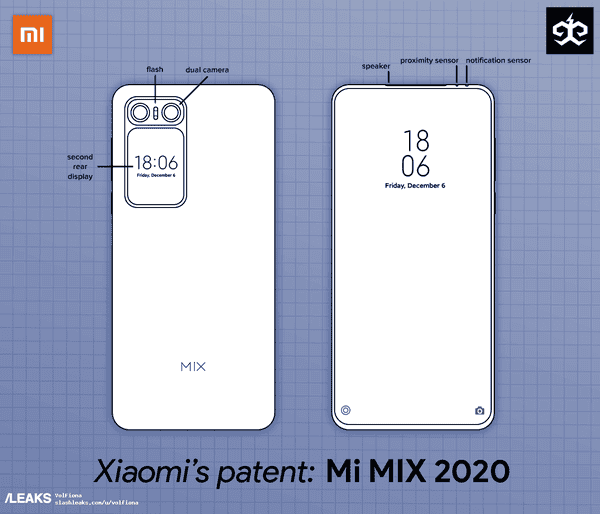 According to this leak, the Xiaomi MIX 2020 uses a true full-screen design on the front. Its surrounding borders are very narrow. But what’s more surprising, there are no signs or notes about the front camera. Does this mean it will sport an in-screen camera? Who knows?

However, compared to the front, the back of the phone seems to be the focus of this phone. A small secondary screen is also placed on the back. It can display time, date and other information. In addition, the rear dual-camera is expected to be used directly for selfies.

In order to achieve true full-screen, the patent uses a dual-screen solution previously seen on other models, such as the VIVO NEX Dual-Screen. But if the latter has been on the market for a while, it still causes serious doubts whether this one will become a reality.