Chinese manufacturing giant, Xiaomi, has been doing quite well in the smartphone market. Not just its smartphone business, its manufacturing business generally is amazing. Since the company started the offline marketing system, its business has grown exponentially. It remains in the top 5 in the global smartphone manufacturer ranking. It is also in the top 5 in China. As for India (second-largest smartphone market globally), Xiaomi has been tops for several consecutive quarters. Looking at its smart TV business, it is the best brand in China and India. Furthermore, Xiaomi’s smart bands and other devices are doing just fine in the market. Recently, Xiaomi’s CEO, Lei Jun, revealed the company’s performance for 2019. 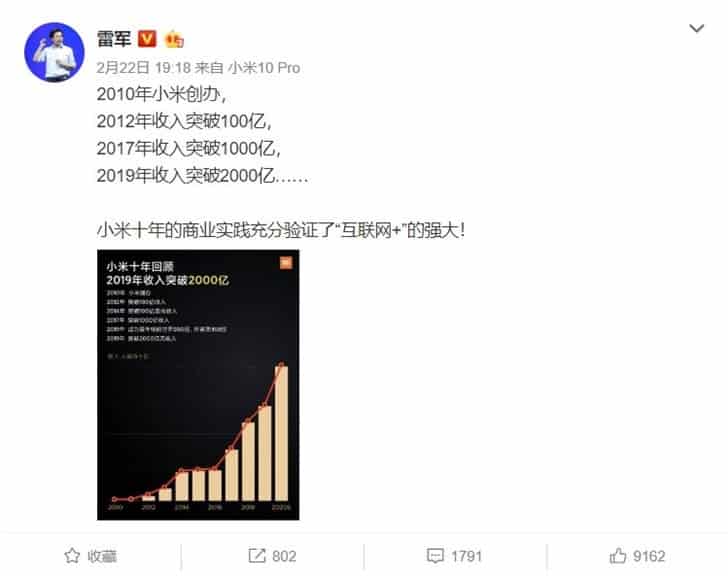 Lei Jun on Xiaomi’s revenue since 2010

According to Lei Jun Weibo post, Xiaomi was founded in 2010. In the first two years (2012), the company’s revenue hit 10 billion yuan. However, it took another 5 years (2017) to hit the 100 billion mark.  Interestingly, moving from 100 billion Yuan to 200 billion Yuan didn’t take much time. By the end of 2019, Xiaomi’s revenue already exceeds 200 billion. In Lei Jun’s view, he believes that Xiaomi’s ten-year business verifies the power of the “Internet”. 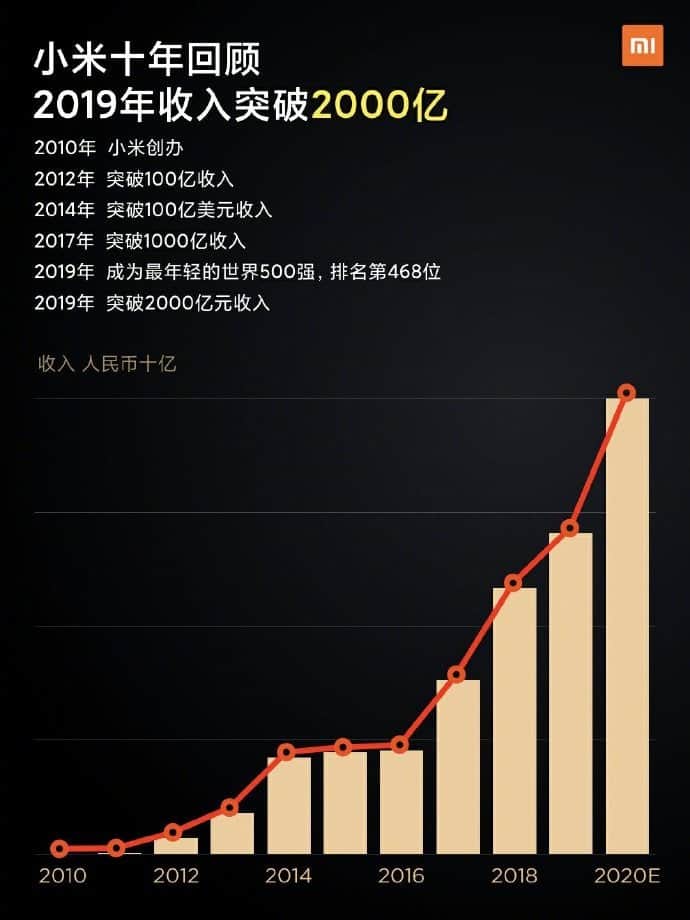 A few days ago, there were reports that Xiaomi Group’s annual revenue for the year ending December 31, 2019, is expected to exceed RMB 200 billion. Its R & D expenses are expected to be about RMB 7 billion. Xiaomi also stated that the Xiaomi Group will keep following its original template and will continue to invest in research and development. It will continue to focus on “5G + AIoT” in order to expand its advantages in loT. For the year ending December 2020, the expectations are that Xiaomi R&D expenses will exceed RMB 10 billion.

No doubt, Xiaomi has done pretty well for its relatively young age. What do you think about Xiaomi’s growth rate?  Will this company be on par with the likes of Apple and Samsung? Let us know your thoughts in the comments.