Xiaomi is set to unveil the Redmi Note 9 series on March 12 at an online-only event in India. Interestingly, although we are just a week away from the announcement, this new duo has not leaked much yet. Only now, the first Geekbench listing of Redmi Note 9 Pro has surfaced online today. It will take on the mantle from the Redmi Note 8 Pro and compete with the Realme 6 Pro which has presumably also appeared on Geekbench with the model number RMX2061.

As per the Geekbench listing (via Nashville Chatterclass), the Redmi Note 9 Pro codenamed ‘curtana’ will be powered by an octa-core Qualcomm Snapdragon processor clocked at 1.8 GHz. The variant that has been benchmarked sports 6GB RAM, however, there could be a couple more variants. As for software, the device will run Android 10 out of the box, which is obvious for an Android phone releasing in 2020. 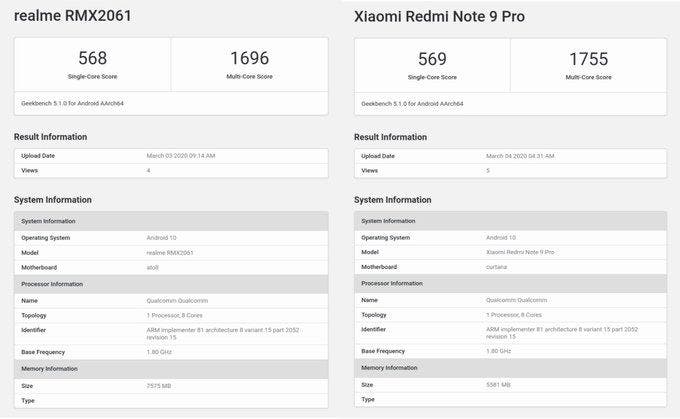 Talking about scores, the forthcoming Redmi Note 9 Pro bags 569 points and 1755 points in single-core and multi-core tests respectively. Comparatively, the scores are somewhat equal to a recently spotted Realme device with model number RMX2061, which more or less could be the Relame 6 Pro scheduled to launch on March 5. Anyways, it should be noted the Realme device that got benchmarked features 8GB RAM and only scores 1676 points in multi-core test but obtains 571 points in the single-core test.

Going by the identifier and base frequency of the chipset mentioned in the listings, both the Redmi Note 9 Pro and Realme 6 Pro could be powered by the same processor (Snapdragon 720G?). Additionally, these two devices will be accompanied by a non-pro version. Both Realme and Redmi have cancelled the offline event gathering due to the COVID-19 threat and will broadcast the launch online.