Samsung debuted the Galaxy S10 Lite alongside the Galaxy Note 10 Lite at CES 2020 in January. It has been quite a while since the device hit various markets. And now, the South Korean smartphone maker has rolled out an update to the Galaxy S10 Lite focussing on improving the camera performance, as reported by Tizenhelp.

The new update, which is being seeded out to the Galaxy S10 Lite users weigh 416.22 MB in size and bring a host of features as well as February 2020 security patch. The notable new additions of this update include the ability to shoot 16:9 UHD 4K (3840 x 2160 pixels) videos at 60 fps and ‘Super Steady’ mode for UHD video recording. Unfortunately, the latter function does not seem to work on the unit used by XDA Developers. 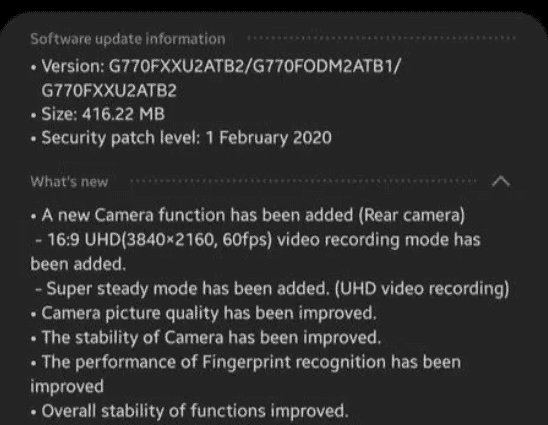 Further, the changelog of the update also reads improvement in picture quality along with enhancement in the stability of the camera app, improved fingerprint recognition performance, better overall stability of functions, and updated security features. As it is an OTA update, once the update gets installed, users cannot revert back or downgrade to the previous version of the software. Interestingly, the changelog mentions this explicitly at the end of the list.

That said, since the update is being rolled out over the air, it will take time to reach every device and hence do not worry if you haven’t received the update yet.