A new realme 5G smartphone has been spotted on the CCC (3C) database today. The handset with model number RMX2142 is only the third 5G device that could soon go official in China. The first two are the Realme X50 and X50 Pro.

The RMX2142 model spotted on the 3C certification database and the MIIT certification website has 30W fast charging (5VDC, 6A Max). The MIIT database reveals it is a 5G handset and this certification comes just a couple of days after the Realme X3 SuperZoom was spotted on Geek bench and NBTC Thailand.  It is possible that the new model is a high-end version of the Realme X3 series as the SuperZoom model was detected running a Snapdragon 855. 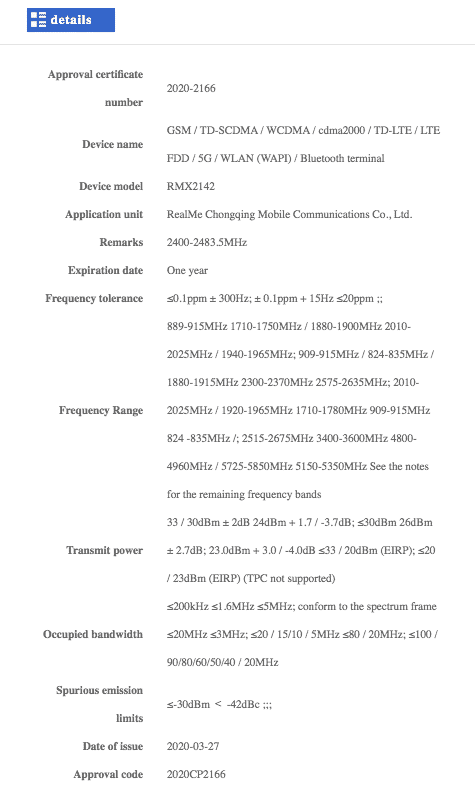 Speculatively speaking, the RMX2142 could carry a Snapdragon 5G chip or even one of MediaTek’s Dimensity 5G chipsets which we’ve yet to see on a Realme phone. It should also very well run at least Android 10, as the benchmark has hinted. But what’s a bit surprising is that Realme usually starts off new series launches in India but this would be one of the few instances where it rolled out a product in China ahead of India. However, even this is just speculation as we don’t know when these devices will launch.  The Realme X3 series has also been spotted on India’s BIS portal that almost confirms its India launch.

Regardless, with the current lockdown expected to continue for yet another two weeks, it’s possible that the new series will launch there first. We expect new data regarding this series to pop up soon on the TENAA database.